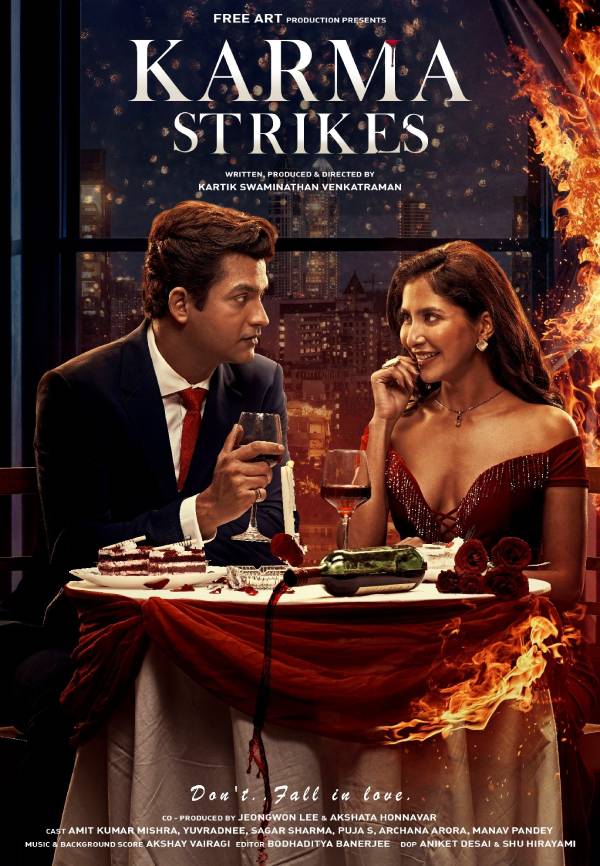 “Karma Strikes” is a family drama, a romantic love story, and an intense thriller; you can expect it all! Get ready to enjoy a roller-coaster ride with unpredictable twists and turns in the joyous company of family and friends!

Empowered by outstanding performances, melodious songs, beautiful locales, brilliant direction, and a taut screenplay, this film promises to entertain the audience and simultaneously leave them teary-eyed.

“Karma Strikes” is a truly global film that has been shot in both India and the USA. It boasts of extremely talented artists from all over the world including Japan, South Korea, Turkey, Brazil and, of course, our homegrown talent from India.

The cast of the film was carefully chosen after multiple and exhaustive auditions. The selected ensemble comprises of theatre artists who have done several short films, but are however ‘newcomers’ when it comes to acting in feature films. In other words, they are OUTSIDERS with no connection whatsoever to the Indian film industry.

“Karma Strikes” has a very engaging story and serendipitously the story behind making the movie is equally as engaging, courageous, and full of fight.

The screenplay for the movie was written way back in 2010 by Kartik. At that time, he was engaged in a corporate job

But as we all know; Karma works in wonderfully eccentric ways!! Kartik’s spouse, “Aafreen Karim”, was extremely encouraging and wanted him to follow his childhood passion. Finally in 2019, with Aafreen as his pillar of support, Kartik quit his job and enrolled to study filmmaking at New York Film Academy. Subsequently, he created 5 short films that won several International Awards. He also re-wrote the screenplay of “Karma Strikes” to make it more relevant and appealing to the present generation. After laying the foundation, he geared up to pitch it to different production houses.

But the film starred new actors who were unknown faces in the world of cinema. This turned out to be the biggest hurdle during the pitching process.

Even though the producers liked the story and other aspects of “Karma Strikes”, they wanted the cast to be well-known faces from the industry.

Finally, there were 2 options available for Kartik and his team – either change the cast or produce it themselves. And they chose the latter. Consequently, in 2020, Aafreen and Kartik launched “Free Art Productions” as a production company to produce the film.

With enthusiastic support from Family and Friends, the couple raised the money required to start the film. When they fell short of additional finances, they had to sell their home in Mumbai to be able to finish producing the director’s vision on film.

The film was shot in difficult circumstances during and after the 2nd wave of the Covid-19 pandemic.

Finally, after facing all the hardships, “Karma Strikes” was completed against all odds due to sheer hard work and self-belief by a team of OUTSIDERS.

Film Director Kartik Venkatraman believes that people will relate to his movie and will be able to connect on both emotional and entertainment quotients.

What is group art therapy?Parsa Peykar, in response to this question, says