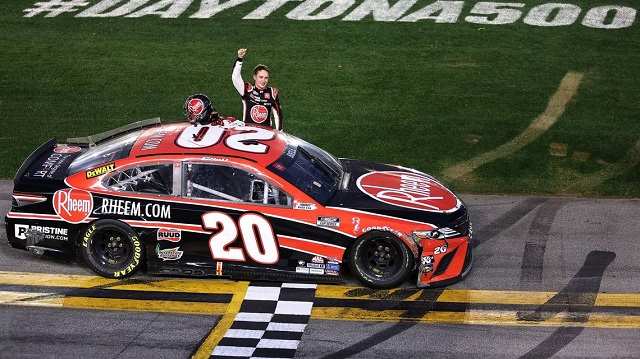 Christopher Bell pursued down Joey Logano on the winding Daytona road course Sunday for his first career Cup triumph and a coveted spot in NASCAR’s playoffs.

Bell’s triumph wasn’t exactly as staggering, however, he actually delivered far sooner than anticipated in his re-visitation of JGR. He was lent to Leavine Family Racing a year ago for his freshman season, yet Gibbs pulled him back to JGR this year.

It gave Bell a competitive Toyota yet a triumph, this soon, was a major inquires.

“This is one of the highlights of my life,” Bell said. “I’ve prepared my whole life for this moment to race in the Cup Series, last year was such a learning curve for me. I’m very grateful that I got the opportunity to run in Cup and it definitely prepared me to go to Joe Gibbs Racing.”

Bell had a disappointing newbie season driving for Leavine with only seven top-10 completions in Toyotas not exactly as strong as Gibbs’ four-car fleet. Presently driving some of the best cars in NASCAR, Bell joined amazement Daytona 500 winner Michael McDowell with spots in the 16-driver playoff field.

He needed to chase down Logano, who had constructed a decent lead on the field yet couldn’t fight off Bell whenever he’d got him. Logano completed second; a week ago he and partner Brad Keselowski smashed each other racing for the Daytona 500 win.

“I hate being that close,” Logano said.

Denny Hamlin was third to give Gibbs two cars in the top three. Kurt Busch completed fourth and Keselowski ended up fifth for a nice Team Penske bounce back.

Chase Elliott again had the most predominant car yet his streak of four successive triumphs in points-paying road races was snapped. He led a race-high 45 laps and was out front when an alert for rain 15 laps from the completion constrained Hendrick Motorsports to settle on an essential call.

Elliott traded track position for new tires, pitted from the lead, and fell to fifteenth. He moved gradually up to fifth yet spun when he ran into the rear of Kurt Busch. Elliott completed 21st.

“Cautions like that kind of makes for a mixed bag, who stays and who goes, it’s a bit of a gamble,” Elliott said. “I thought tires was the right move. But you get back into traffic and it just gets to be so chaotic and just depending on who gets through (traffic) and who doesn’t and it determines how it shakes out.”