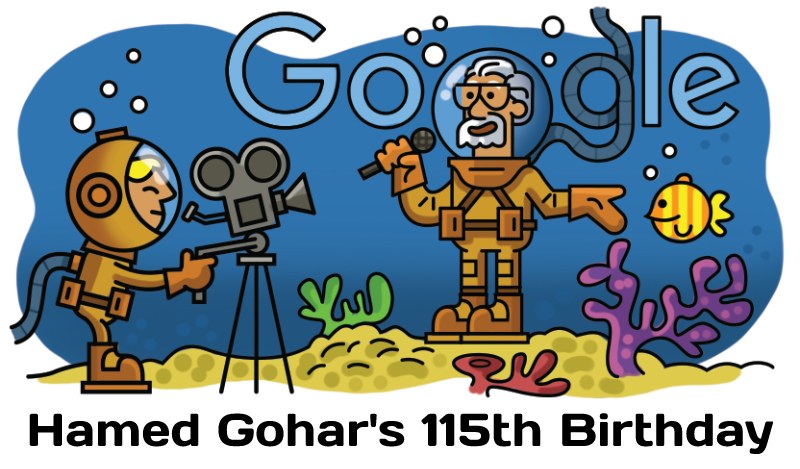 Google Doodle celebrates the 115th birthday of an Egyptian oceanographer, scientist, and TV presenter Prof. Hamed Abdel Fattah Goher (حامد عبد الفتاح جوهر), who is viewed as the founding father of oceanography in Egypt and the Arab world, and hosted an educational show called “Sea World” for 18 years, on November 15, 2022. Here are some interesting and fun facts about Hamed Gohar (حامد جوهر).

Here is a look at the life and work of Prof. Hamed Abdel Fattah Goher (حامد عبد الفتاح جوهر).

Hamed Goher (حامد جوهر) first joined the Faculty of Medicine at Cairo University, and in spite of his brilliant progress in the preparatory year, he later decided to move to the Faculty of Sciences.

From there, Hamed Goher got a Bachelor of Science with first-class honors and was delegated as a teaching assistant in the Department of Animal Sciences at the college.

In 1931 – two years after his graduation – Hamed Goher submitted his first thesis to get a master’s degree, the subject of which was “Microanatomy and histology of the endocrine glands in the rabbit”.

After that, Hamed Goher (حامد جوهر) moved to work at the Marine Biology Station in Hurghada, and continued scientific research in the animals of the Red Sea, until he got a doctorate in science in this branch of knowledge, and maybe – as Dr. Abdel Halim Montaser says – the first to get it in Egypt.

In 1931, Prof. Hamed Goher started research on Xenia, or soft corals of the Red Sea finished in 1939. In 1934 he published a study in the British journal, Nature, on ‘The Partnership between Fish and Anemone’.

Six decades ago, Hamed Gohar started the first extensive research study of marine studies in Egypt and the Arab world.

Hamed Gohar (حامد جوهر) took over the management of the marine life station in Hurghada since its beginning and for forty years.

He established the Institute of Aquarium at Ataka in Suez and set up one more museum for the life of the Red Sea.

Prof. Hamed Goher (حامد جوهر) worked as an advisor for science and technology at the Arab League in 1970.

Member of the Academy of the Arabic Language in Cairo in 1973.

Hamed Goher partook in the Arabic scientific dictionaries issued by the Arabic Language Academy, most remarkably the Biology Dictionary in Biology and Agriculture, which required 8 years to plan from 1976 to 1984, and some of the leading Arab researchers took part in it.

Hamed Abdel Fattah Goher (حامد عبد الفتاح جوهر) was an advisor to the Secretary-General of the United Nations to organize the first International Conference on the Law of the Sea in Geneva in 1958.

In 1959, the International Atomic Energy Agency picked him to head the Committee for the Disposal of Nuclear Waste in the Deep Sea.

Hamed Goher was a member of the Advisory Committee of the Food and Agriculture Organization (FAO) of the United Nations.

He had a well-known weekly TV program broadcast on Friday called The world of the seas, and its broadcast lasted for 18 years, where he used to show films about different marine creatures and he remarked explaining the image and presenting the various factions, their habits, and qualities those years.

A whole generation of Arabs knows Hamed Goher from his famous TV show, “Sea World”, which he hosted for over 18 years.

Hamed Abdel Fattah Goher (حامد عبد الفتاح جوهر) got State Appreciation Award in Science in 1974 and the Order of Merit, first class in 1975.

By featuring underwater scenery and natural sea life, Hamed Goher gifted Arabs with inspiring information about marine biology, and is remembered today for his distinct voice and unending love for the ocean.

On November 15, 2022, Google featured a Google Doodle on its homepage for celebrating Hamed Gohar’s 115th Birthday.

Interesting and Fun Facts about the Angklung, an Indonesian traditional musical instrument