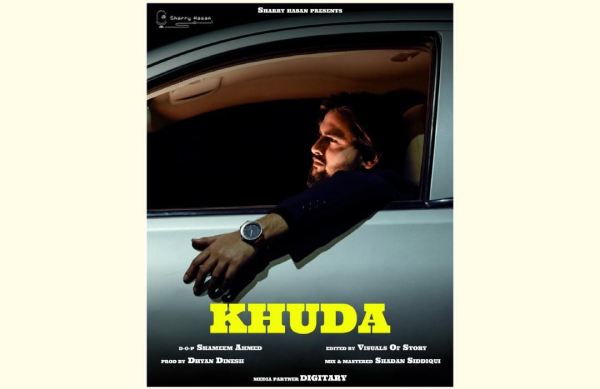 The young Indian icon and entrepreneur, Sharry Hasan’s latest song “Khuda Ko Dikh Raha Hoga” 2022 version was released this Saturday. The cover song has just been released but it has already surpassed 2.3k views on youtube in just 24 hours.

“ Khuda Ko Dikh Raha Hoga”, is the most awaited cover song from “Khuda” by a young rising star Sharry Hasan. This song is produced by Dhyan Dinesh and directed by Shameem Ahmed. Media and marketing done by Digitary, Nikunj Agarwal.

Though this is cover song but it is no less than the original song by Jojo and Najam Sheraz.

More about the song:

Sharry’s cover song , “ Khuda Ko Dikh Raha Hoga ” is a beautiful but underrated song from the T-series movie “Haunted” that was sung by Jojo Mukherjee and Najam Siddiqui. The lyricist of this song is Junaid Wasi and the music was given by Chirantan Bhatt.

“Khuda Ko Dikh Raha Hoga” 2022 version, the masterpiece produced by Dhyan Dinesh, sung by  Sharry Hasan, directed by Shameem Ahmed and the edited by lilboiofficial has introduced this beautiful song to the listeners and surpassed 2.3k views just in ones day. Through this cover song, Hasan has touched many hearts as he starred and also gave his soothing voice to the amazing lyrics. Though this is a cover song, the young artist made the listeners and the fans feel as if it is the original song. Through the music video of this song, Sharry conveyed the tragic story of a guy who has gone through a plane crash and lost his loved ones.

The young rising star of India Shahreyar Hasan who is also known as Sharry is one of the youngest and talented artist and entrepreneur from Motihari district of Bihar. Sharry is not just a great singer but also an excellent song writer, actor, music composer, poet, stage performer and model.

His passion towards music began with all the romanticism spread by the top singer Atif Aslam.

In 2012, he shifted from Bihar to Delhi with his pure love towards music and in 9th standard, he took a step forward to fulfil his dream of becoming an artist by a creating a band named “TEAM MOH”. Later, he got the first opportunity to perform facing thousands of people at “Jamia Auditorium”. He took his vocal lessons for classical music from Shri Paras Mani Chaudhry and started his career.

Hasan released his first official song “ Sunn Mere Dil” in 2016 which received a lot of love and appreciation from people and his second song “Mera Ashq” was released in 2018 which helped him to show and express his work, art, passion and guidance.

After releasing the masterpieces, Sharry had a moment of break down when he did not work on any project but after the two years break, he came back with a song named “Khwab”. Later, he worked in many other music videos and commercial advertisements such as Boat Headset and parachute as an actor. He also released his three self-composed singles.

Kirby And The Forgotten Land tops the UK Boxed charts; earns the biggest launch in the franchise’s history