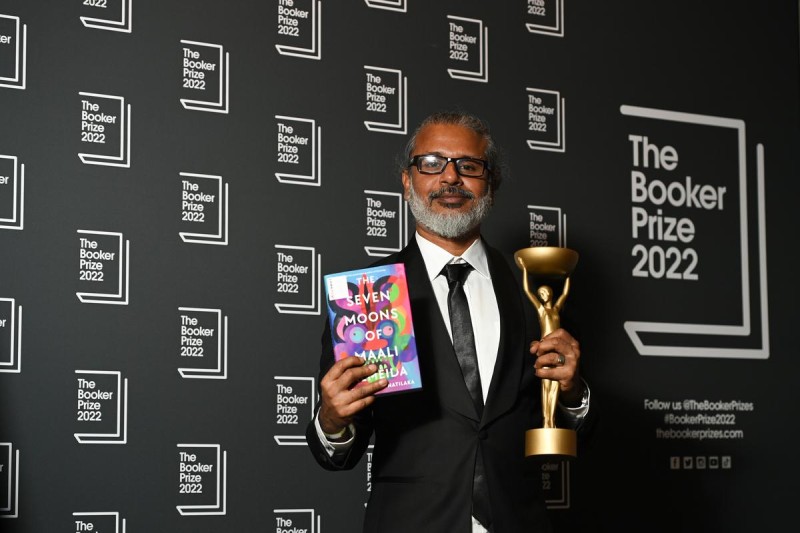 Sri Lankan writer Shehan Karunatilaka has won the 50,000-pound ($86,000) Booker Prize, for his novel The Seven Moons of Maali Almeida, a mix of satire, ghost story, and whodunnit set in 1989 during the Sri Lankan Civil War.

The titular character is a war photographer taker who finds he has died and sets out to find out who killed him — exploring an eternity that is surprisingly bureaucratic.

Declaring the prize at a ceremony in London on Monday evening, chair of the judging panel Neil MacGregor said that The Seven Moons of Maali Almeida “takes readers on a journey at once horrific and humorous — beyond life and beyond death, to the world’s dark heart”.

“There, astonishingly and encouragingly, we find tenderness, laughter, loyalty, and love.”

MacGregor was joined on the judging panel by academic and broadcaster Shahidha Bari; historian Helen Castor; novelist and critic M John Harrison; and novelist, poet, and professor Alain Mabanckou. The judges were consistent in their decision to award the prize to Shehan Karunatilaka, as per the chair.

Shehan Karunatilaka’s success comes as Sri Lanka recuperates from a year of social, political, and economic turmoil, during which anti-government fights brought about the resignation of first Sri Lanka’s Prime Minister and afterward President Gotabaya Rajapaksa.

Accepting the award, Shehan Karunatilaka said: “I was going to read the names of all the journalists, the activists, the politicians, the civilians, the innocents who have been murdered by the state, or by those opposing it, in my lifetime in Sri Lanka. But if I had done that, we’d be here all night.”

“My hope for Seven Moons is this: that in the not too distant future — 10 years or as long as it takes — that it is read in a Sri Lanka that has understood that these ideas of corruption and race-baiting and cronyism have not worked and will never work…I hope it’s read in a Sri Lanka that learns from its stories, and that Seven Moons will be in the fantasy section of the bookshop — next to the dragons and unicorns — and will not be mistaken for realism or political satire.”

Accepting his award, Shehan Karunatilaka addressed the people of Sri Lanka in Tamil and Sinhalese. He summed up what he said in English: “I write these books for you… Let’s keep sharing these stories.”

He said he expects that one day the political situation in Sri Lanka will be such that his novel will “sit on the fantasy shelves of bookshops”.

This year the original 1969 Booker prize trophy was restored in memory of its maker, the children’s writer and illustrator Jan Pieńkowski, who died in February.

The trophy was introduced to Shehan Karunatilaka by Camilla, the Queen Consort, in one of her first official public engagements since she took on her new role, at a ceremony hosted by comedian Sophie Duker at the Roundhouse in London. Last year’s winner Damon Galgut presented Karunatilaka his prize money of £50,000.

Shehan Karunatilaka is the second Sri Lankan to win the Booker in its 53-year history, following Canadian Sri Lankan writer Michael Ondaatjie, who won in 1992 for The English Patient.

It is the second year in a row that a Sri Lankan writer has been on the Booker Prize shortlist, following Anuk Arudpragasam, for A Passage North.

Shehan Karunatilaka, 47, was born in Galle and experienced childhood in Colombo.

Karunatilaka’s second novel, The Seven Moons of Maali Almeida comes over a decade after his debut, Chinaman, which was published in 2011. The Booker-winning novel tells the narrative of the photographer of its title, who in 1990 awakens dead in seemingly a celestial visa office. With no thought of who killed him, Maali has seven moons to contact his loved ones and lead them to a hidden cache of photographs of civil war atrocities that will rock Sri Lanka.

With a background working in advertising, as a copywriter, Shehan Karunatilaka has demonstrated proficiency at using humor and genre to explore Sri Lankan society: his 2011 debut novel, Chinaman: The Legend of Pradeep Mathew, took readers inside the corruption of the Sri Lankan cricket world of the 80s by means of what he has described as a “drunk detective story”.

The Seven Moons of Maali Almeida is published by the independent press Sort of Books. This year is the first time a book by the publisher has been longlisted for the prize. Shehan Karunatilaka has become the second Sri Lankan-born author to win, following Michael Ondaatje, who won in 1992 with The English Patient.

Chinaman set him on the map as a novelist, winning a few prizes, including the Commonwealth Book Prize — and set him on a winding way to his latest novel.

“I didn’t expect it [Chinaman] to travel outside of Colombo or outside of the subcontinent, but I was delighted to see it did quite well,” Shehan Karunatilaka told ABC RN’s The Book Show.

“And suddenly, I was called on to talk about cricket — but I wasn’t really that much into cricket. I mean, I was researching for the novel, but there are a lot of Sri Lankans a lot more obsessed with cricket than me.

“And so I thought: OK, I should do something completely different for my next trick. And then I thought, ‘What Sri Lanka needs is a great ghost story.’ Because there’s been plenty of other stories, but [not in that genre]. So I started collecting ghost stories and researching tragedies of the past.

“So that was the motivation [for The Seven Moons of Almeida]. But then I also realized that a ghost story … [was] a way to discuss this complicated political situation.”

Shehan Karunatilaka was a teen in 1989 when the novel is set, a period he portrays as “the darkest time in our history”, with various conflict fronts — between UN forces and the Tamil Tigers, and between the government and disaffected workers and students.

“[It was] heavy stuff for a teenager going to school — that you had two wars, effectively, happening at the same time,” he told The Book Show.

“Looking back, from 20 to 30 years later, one thing I felt safe about [in] writing about this period was [that] most of the protagonists and antagonists were dead, and this period had been well-documented. And both of those wars were effectively over. So yeah, it seemed like a very good place to set a ghost story, because there wasn’t a shortage of corpses or restless spirits.”

In The Seven Moons of Almeida, he handles this dark chapter of history with a satirical tone and offsets the horror of violence with gallows humour.

In the opening act of the novel, for example, the practicalities of body removal are examined by two thugs who are resolving how to manage Maali’s corpse.

The afterlife, in the meantime, is plagued by bureaucratic failures and populated by restless souls who need to get a piece of paper step by the right department in order to be ‘processed’.

“I think as Sri Lankans it’s better to laugh than to cry — and if you don’t laugh, that’s what you end up doing,” Shehan Karunatilaka told The Book Show.

“You know, Sri Lanka is a grim place most of the time, but it’s not a sad, depressing place … because we set tend to appreciate the absurdity and the humour in it.”

Chinaman won the Commonwealth prize, the DSL, and the Gratiaen prize, and was selected for the BBC and The Reading Agency’s Big Jubilee Read. The writer has likewise composed rock songs and screenplays.

Different books on the shortlist were Glory by NoViolet Bulawayo, The Trees by Percival Everett, Treacle Walker by Alan Garner, Small Things Like These by Claire Keegan, and Oh William! by Elizabeth Strout.

That’s what MacGregor said albeit every one of the six books on the shortlist were altogether different, “it became clear … that they were all really about one question, and that is ‘what’s the importance of an individual life?’”

Bea Carvalho, head of fiction at Waterstones, said she and her partners were “thrilled” that Shehan Karunatilaka’s “fiercely inventive novel” had won.

She portrayed The Seven Moons of Maali Almeida as “a triumphant, epic feat of imagination and wisdom which dissects a dark period of our recent history with satire and panache”.

Singer-songwriter Dua Lipa delivered a keynote speech on how her love of reading assisted her with interfacing with her family and identity. She said early obsessions included Roald Dahl and Malorie Blackman, “both of whom gave me little pearls of wisdom that still guide me today”.

Earlier this year, the singer launched a podcast called At Your Service, with visitors including Hanya Yanagihara and Min Jin Lee. She said talking one-to-one with some of her favourite authors was “honestly better than any therapy session I’ve ever been to”.

The ceremony was broadcast as part of a 45-minute Front Row special on BBC Radio 4, where presenter Samira Ahmed interviewed British-Turkish writer Elif Shafak about how the attack on Salman Rushdie’s life affects writers all around the world. The ceremony likewise paid tribute to double-Booker winner Hilary Mantel, who died in September.

Behind The Scenes: An Interview With Nina Hersher, Best-Selling Author Of Digital Wellness: Your Playbook For Thriving In The Remote Work Era