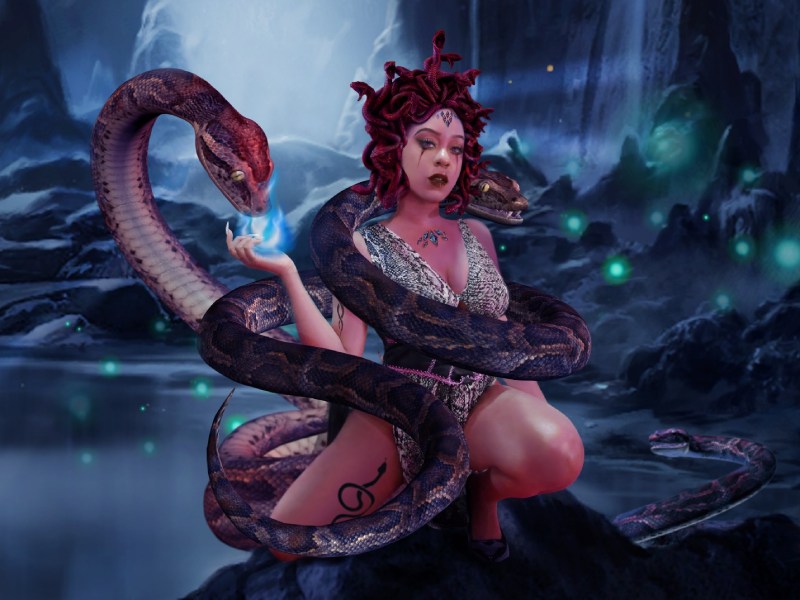 ‘You may gaze at her reflection in still waters of the lake but don’t look at her directly, or death will be your fate.’

In Greek mythology, also called Gorgo, Medusa was one of three monstrous gorgons, who were generally described as winged human females living with venomous snakes in the place of hair. It is said that those who looked in their eyes would turn into stone. The two monstrous gorgons were immortal, whereas medusa was a mortal human. The stories tell that Medusa was a lovely young maiden. Her beauty caught the eye of the sea god Poseidon who tried to rape her in the holy temple of Athena. Athena got furious when she heard about what had happened, and she transformed Medusa into a monster with a deadly curse that whoever looked upon her face turned into stone. Later a courageous hero named Perseus was sent on the mission to kill Medusa, and he succeeded by fighting with her reflection using his very polished shield. He cut off Medusa’s head and used it as a weapon against his enemies to turn them into stone. Also, an image of her head was placed on Athena’s armor or on her shield.

This story and character was and is very famous to this day among people. Many people enjoy recreating the character of Medusa with a head of snakes. It is a very challenging character to pull off, yet that is what excites people, and they step forward to take on this challenge. Briana Amerson is also one of these people who took this challenge and amazed everyone with her skills.

Briana created this fierce look, and it blew the internet. Medusa killed people by turning them into stone, but Briana killed people by her looks. She pays great attention to the details on her face, giving herself a very beautiful yet monstrous look. She also pays great attention to her hair, which highlights the character. Her photography and editing skills are commendable. The costume she used had a snake pattern on it, and her eyes resembled the eyes of snakes. The editing on her introduced snakes all around her, which portrays her relationship with these poisonous snakes. When many people are scared of snakes, they are a part of Medusa, a part of her personality, a part of who she is. Briana very well delivered the character of Medusa, and her unique style of cosplay makes Medusa look like the queen of snakes.

Briana Amerson is a very talented girl with immense love for cosplays, gaming, photography, editing, and makeup. Staying in the comfort of her home, she creates some breathtaking looks of favorite characters from different movies and games such as call of duty, Fortnite, Resident 3, spiderman, and captain marvel. Her followers love how she has combined cosplay and gaming to create such surprising content. Briana posts regularly on her Instagram, she posts posters, and behind the scenes. She also follows transitioning trends that are viral on social media but with her own unique style, which helped her gain popularity.

Briana has been working all by herself in her home studio every day to create content for viewers. She also has a YouTube account where she posts about how she edits her posters or posts videos showing her home studio. She also shares the items that she uses along with prices and places from where everything is from so that she can help people who follow her and wishes to open their home studio. She encourages and inspires people to do what they love, and she has been doing and how no one can ever bring you down if you believe in yourself. Briana knows what she does is impressive, and that is why she has been making content even though sometimes it is fun, but at other times it might be challenging to work all alone and create everything yourself. Moreover, she is an African American woman, and social media is not easy at all, there are people who support you, but there are also people who will do everything in their power to bring you down by their mean comments. Briana hasn’t given up despite every obstacle and does what she loves doing.

Furthermore, Briana has a website where she sells products like clothing and mugs printed with her posters or gaming characters. She even has different categories from PC to PS4 and XBOX, and for every category, she has articles. The articles talk about the games available for, the graphics and development of the games, their reviews, and her experience. She even provides information on the upcoming games or news on retail outlets from where you can get games or any other updates regarding the gaming industry.

‘Psychokittykat’ is the name used by Briana for her social media accounts, YouTube, and website. People love her work and support her for the unique style she has and how confident she is. Her collection of costumes is everything a gamer would want to have. Psychokittykat has worked hard to rise to the top, her Instagram stands out on social media, and her content is loved by people and supported. The amount of support received by people helps Briana not to give up and keep pursuing her immense love for gaming. Her transitioning videos are mind-blowing in that they present her work of art to everyone how she changes from being herself to a completely different character. Her art is commendable, and Briana inspires many people to do what they love every day. Briana has also inspired many girls to own up to their personalities. Many people might see gaming as a hobby that is enjoyed majorly by the boys. Still, Briana doesn’t seem to care and encourages every girl to do the same. Also, you can combine all your interest and create something new, like Briana combined cosplay and gaming. Never hesitate or stop believing in yourself

Joshua Krafchick on 4 Skills That Will Make Your Kids Rich

In Italy everyone talks about the musician Nicola Atzei, do you know the song Faster?