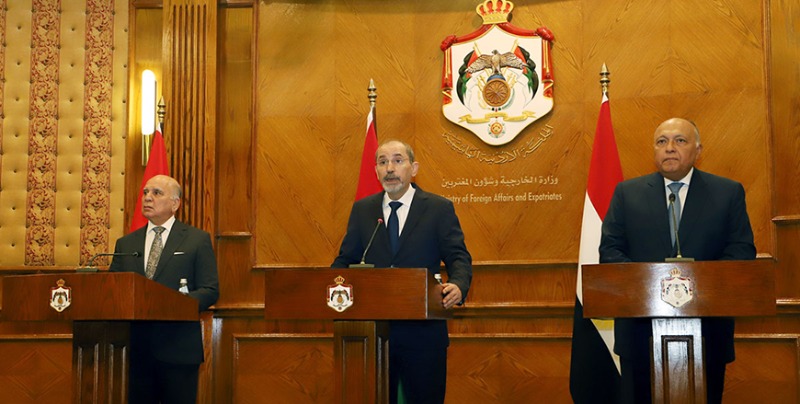 Deputy Prime Minister and Foreign Minister Ayman Safadi received his Iraqi counterpart Fuad Hussein and his Egyptian counterpart Sameh Shoukry on Wednesday to discuss strategic integration and coordination as part of the trilateral Jordanian, Iraqi, and Egyptian cooperation mechanism. The meeting is part of a plan to make Jordan, Egypt, and Iraq work together more closely through the trilateral cooperation mechanism.

Ayman Safadi, Sameh Shoukry, and Fuad Hussein, the foreign ministers of Jordan, Egypt, and Iraq, met on Wednesday to talk about how a trilateral cooperation mechanism could help their countries become more strategically integrated.

According to a statement from the Foreign Ministry, the goals of the three nations are to improve coordination in a variety of areas, including political, economic, commercial, industrial, and security.

According to reports, they identified potential areas of cooperation in industry, politics, economics, security, and economics, and they suggested that negotiations for agreements continue.

Safadi and Shoukry congratulated Iraq on its new government’s formation and expressed the full support of their nations for the country’s stability and security.

The Palestinian cause was one of the regional issues that the three ministers discussed as well. In addition, they agreed to maintain institutional communications in order to facilitate upcoming projects and plans and overcome economic obstacles that necessitate systematic cooperation.

The ministers discussed various areas of cooperation and emphasized the significance of working toward mutual goals and taking into account previous agreements.

Jordan and Egypt’s support for Iraq’s security, stability, and sovereignty, which they noted as a pillar of the region’s security and stability, was reiterated by Safadi and Shoukry. Additionally, the two expressed their gratitude to Iraq for the accomplishments of its political process.

Additionally, they talked about a number of Arab issues, including the Palestinian cause. In order to achieve regional security and stability, the ministers emphasized ongoing efforts, coordination, and consultation to resolve regional crises and serve Arab interests.

In order to get ready for the fourth trilateral cooperation mechanism summit, which will be held in Egypt next year, the ministers agreed to hold additional meetings.

The foreign ministers agreed in a joint statement after the meeting to keep institutional communications going to check on projects that were submitted and to coordinate future steps to increase momentum, especially in light of the economic challenges that made systematic cooperation more urgent.

Likewise on Wednesday, the three foreign ministers held a joint press conference, where Safadi said that the three-dimensional instrument was launched as a reason for expanding upon the three nations’ shared history and interests, fully intent on cooperating gainfully to increment regional collaboration and to give a model to such participation.

Safadi went on to say, “We are firmly convinced that our joint work will serve the common interest of all of us,” pointing out that many of the joint projects that have been agreed upon over the past few years are currently being put into action.

Safadi also mentioned Iraq’s “significant historic” victory over Daesh and its “steady and clear” start to reconstruction, both of which have demonstrated that the political process in Iraq has been successful with the formation of the new government. Jordan is looking forward to collaborating with the new government to pursue joint action and strengthen cooperation, according to Safadi.

According to Shoukry, the purpose of the trilateral cooperation mechanism is to promote economic integration, strengthen ties between the three nations, and work toward achieving shared goals.

He also congratulated Iraq for the political progress that has been made, which provides “a glimpse of hope” for the stability, unity, and territorial sovereignty of the country. Additionally, he emphasized that Iraq will continue to be an essential part of joint Arab action and regional stability.

The Egyptian minister stated that the three nations face numerous difficulties as a result of the current geopolitical climate, economic pressures brought on by the crisis in Ukraine, and concerns regarding energy and food security. All issues require further collaboration to address them. He asserted that the likelihood of overcoming these challenges will rise as a result of cooperation, solidarity, and joint action.

According to Hussein, Iraq places a high value on collective action in a variety of economic, political, and international issues, and he stated that the mechanism for cooperation has been in place during each of the three previous governments in Iraq. The Iraqi minister also mentioned that this meeting covered a number of economic project-related topics.

Hussein stated that in order to address issues pertaining to food, medicine, and energy security that transcend national boundaries, regional and international relations must be strengthened.

He mentioned that preparations are being made to host the second Conference this month.

During Wednesday’s summit, Shoukry likewise praised Iraq and Jordan for their strong support and backing of Egypt’s water security.

Egypt’s, Iraq’s, and Jordan’s leaders met at a summit in June 2021 to agree that Egypt’s water security is a part of Arab national security. They also supported Egypt’s “rational positions” to reach a deal on the Grand Ethiopian Renaissance Dam that is based on international law and respects Egypt’s and Sudan’s legitimate rights.

The foreign ministers of Egypt, Jordan and Iraq have held a series of periodic meetings starting around 2019.

The last meeting took place in late October on the sidelines of the Arab summit in Algeria, and the last summit took place in June 2021 in Baghdad.

The King of Bahrain and the president of the United Arab Emirates attended a summit meeting between the three leaders in Egypt’s New Alamein city in August 2022.