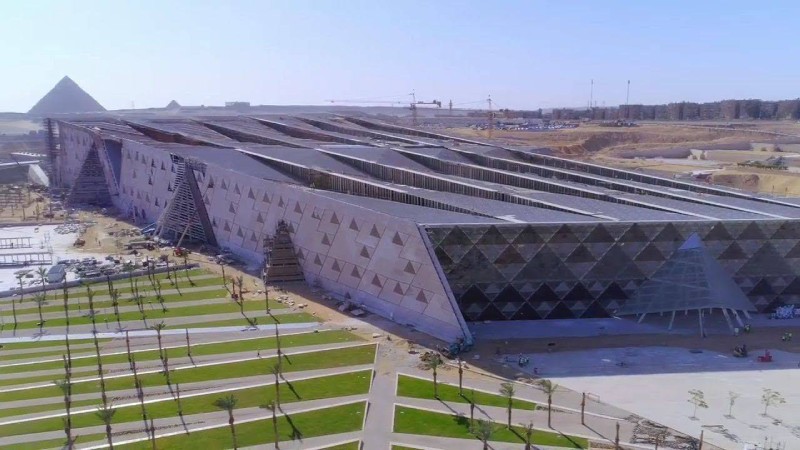 Before the Roman Empire, which extended from Scotland’s Antonine Wall to the Persian Gulf in Kuwait; Egypt and her pharaohs had a glorious rule and left footprints on the sands of time, footprints that time and tide have not been able to erase before Greece, whose Acropolis symbolizes the beginning of Western civilization and culture, and before the Babylonian Empire, whose Hanging Gardens continue to fascinate us.

One of the world’s richest collections of ancient ruins can be found within her borders. Over four thousand years of human history look down upon us from the high stones of the Pyramid of Giza, one of her most famous attractions. Her treasures are extensive and valuable.

The enticing part begins here. Many of these treasures will soon be on display at the Grand Egyptian Museum, which will open in 2023.

A Brief History Of The Grand Egyptian Museum

In 1992, the Egyptian government announced the beginning of a project to establish the Grand Egyptian Museum in response to the limitations imposed by the institutions displaying Egypt’s treasures in terms of their infrastructure.

In 2002, ten years later, an architectural competition to select the GEM’s designer was announced. The bid was won by Heneghan Peng Architects, which outperformed more than 1,500 architectural firms from 83 different countries.

In the middle of 2012, the project was to be finished. However, it has experienced a number of delays, one of which was brought about by the 25 January Revolution.

The Egyptian government is expected to open the world’s largest archeological museum in 2023, putting an end to the wait.

Why the Grand Egyptian Museum will be a World Marvel

The authorities will place the most valuable treasures that the ancient civilization left behind for future generations here. The vast majority of these priceless relics are objects of profound awe and wonder. Up to 100,000 unique artifacts will be housed in the Grand Egyptian Museum, according to some accounts.

The restoration center, which is made up of up to 19 laboratories, is one of the highlights of the museum’s impressive infrastructure. Many of Ancient Egypt’s treasures would have been lost to the world without these restoration labs.

However, the world will soon be able to view Tutankhamun’s gold sandals, bed, jewelry, quite a few obelisks, and a great deal of other exciting treasures thanks to these specialized labs.

The sum of all the treasures found in King Tut’s tomb is about 5,000. Food, a number of musical instruments, writing materials, and about 30 bottles of wine are among these. Additionally, the GEM will attempt to rectify some previous items that were displayed incorrectly; front as back or front as the back.

However, it will not just include Egyptian exhibits. Thousands of antiquities from prehistoric times through the Greek and Roman periods will be housed in the GEM.

However, the Grand Egyptian Museum’s glory lies not only in the awe-inspiring objects inside but also in the building itself.

The Grand Egyptian Museum is an architectural masterpiece for the following reasons:

It is evident from the GEM itself that it was not built solely to house out-of-date artifacts. Additionally, it was intended to be an attraction in itself. The museum’s size will be the first feature visitors notice. It appears to be a ship, possibly the Titanic, that has run aground in some arid land.

It effortlessly earns the title of “The World’s Largest Archeological Museum” due to its 484,000 square feet of floor space.

It has more floor space than Exchange 106, the Petronas Twin Towers, one of Kuala Lumpur’s most popular tourist attractions, and Willis Tower. Almost everyone will agree that this is a building fit for a pharaoh.

The pyramid theme can be seen on the exterior of the GEM. It can’t come as a surprise. It is only about two miles away from the oldest and only one of the Seven Wonders of the Ancient World, the Pyramids of Giza.

The GEM will be connected to the famous pyramids by a pedestrian walkway that will be longer than the Champs-Élysées. Additionally, the museum will also feature 12 massive exhibition halls.

The layered metal mesh roof in the museum’s atrium contributes to the stunning and impressive continuous light play. A 3,200-year-old statue of Ramses II welcomes visitors at the main entrance. It is a colossus that is 36 feet tall.

Top 10 Most Powerful Passports in the World for 2023