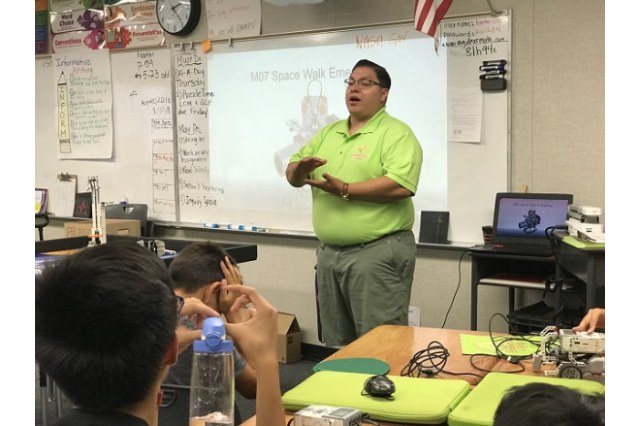 That has been the mantra for entrepreneur Hermann Kreimann.

Kreimann’s Robotics company began as a science summer boot camp less than five years ago. In that time, it has expanded to training over 2000 students across 35 schools every year!

Not only do Kreimann’s teams have a sweeping record of winning tournaments in and around California but have also represented the USA at the championship in Denmark where they competed against over 200 teams from over 70 countries, placing in the top ten.

Hermann explains, “I was a tinkerer even as a child and the army provided me an excellent opportunity to gain the technical expertise that I now rely on”.

A man with many hats, Kreimann is also a former football coach and attributes a lot of the success he’s had in business to the skills he acquired playing sports.

“Football taught me how to communicate effectively with my teammates as well as the opposing team. I think it has helped me connect with my customers as well as my employees.”

Hermann Kreimann was the captain of his varsity football team and believes that coordinating his teammates on the field helped him develop strategic thinking, a skill he was able to transfer into his business ventures.

Kreimann aspires to create a positive work environment for his employees and believes that a true leader must lead by example.

“I’ve always been of the mindset that where there’s a will, there’s a way.”

The entrepreneur also believes that the grit and endurance instilled by sport can be leveraged to great advantage in the world of entrepreneurship.

Kreimann believes that healthy competition and risk taking such as sports brings out the best in people.

He says that while henot the tallest or the fastestsportsman, being on the field made him realise that he was good at understanding the game and developing strategies.

Kreimann, a Dallas Cowboy’s fan,has integrated his penchant for strategic thinking within his robotics business with great success.

“I’m willing to go the extra mile, which is something that few people are willing to do.”

Kreimann offers a lot of free programs in order to expand the reach of his business and products.

He says that he wants to make sure that in the rapidly advancing world of technology, no student is left behind due to a lack of resources.

He says his mission is to, “provide different competition opportunities for students to compete in science, technology, engineering, and math.”

The veteran soldier is a firm proponent of growth and betterment and is always searching for ways of doing things better.

“Hard work makes all the difference. Never give up.”