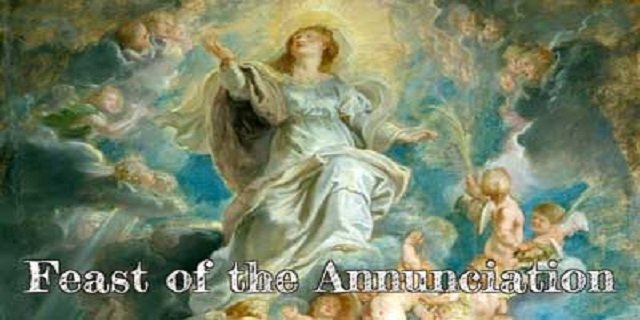 In the Roman Catholic Church, when 25 March falls during the Paschal Triduum, it is moved forward to the primary suitable day during Eastertide. In Eastern Orthodoxy and Eastern Catholicism, it is never moved, regardless of whether it falls on Pascha (Easter). The concurrence of these two feasts is called Kyriopascha.

The Feast of the Annunciation is observed generally all through Christianity, particularly within Orthodoxy, Anglicanism, Catholicism, and Lutheranism. It is a significant Marian feast, named a seriousness in the Catholic Church, a Festival in the Lutheran Churches, and a Principal Feast in the Anglican Communion.

In Orthodox Christianity, since it declares the manifestation of Christ, it is considered one of the 8 extraordinary feasts of the Lord, and not among the 4 incredible Marian feasts, albeit some conspicuous aspects of its liturgical recognition are Marian. Two examples in ceremonial Christianity of the significance joined to the Annunciation are the Angelus prayer, and particularly in Roman Catholicism, the event’s position as the first Joyful Mystery of the Dominican Rosary.

The Feast of the Annunciation was praised as early as the fourth or fifth century. The first certain notices of the feast are in a canon, of the Council of Toledo in 656, where it was depicted as celebrated all through the Church, and in one more of the Council of Constantinople “in Trullo” in 692, which disallowed the celebration of any celebrations during Lent, with the exception of the Lord’s Day (Sunday) and the Feast of the Annunciation.

A Synod of Worcester, England in 1240 restricted all servile work on the feast. As this feast celebrates the Incarnation of the Second Person of the Trinity, many Church Fathers, including St. Athanasius, St. Gregory of Nyssa, and St. Augustine, have elucidated it.

The date is near the vernal equinox, as Christmas is to the winter solstice; as a result of this the Annunciation and Christmas were two of the four “quarter days” in medieval and early modern England, which denoted the divisions of the fiscal year (the other two were Midsummer Day, or the Nativity of St. John the Baptist, on 24 June, and Michaelmas, the feast day of St. Michael, on 29 September).

At the point when the calendar system of Anno Domini was first presented by Dionysius Exiguus in AD 525, he assigned the start of the new year to 25 March, because as indicated by Christian doctrine, the age of grace started with the Incarnation of Christ at the Annunciation, on which date Jesus Christ is believed to have been conceived in the Virgin Mary by the Holy Spirit.

Pope John Paul II established March 25 as the International Day of the Unborn Child, for its remembrance of the conception of Jesus.

Greek Independence Day is celebrated on the feast of the Annunciation and 25 March is likewise a national holiday in Lebanon.