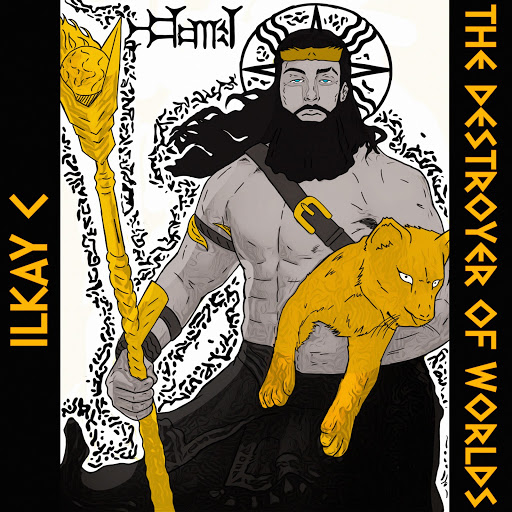 Ilkay C. says the cover artwork for his album was inspired by the ancient king of Sumer, Gilgamesh, which the artist also uses as his alias. Ilkay C. is deep into ancient history and pre-recorded history, and the album is oriented and inspired by the epic of Gilgamesh (the oldest known epic in recorded human history written in cuneiform on stone tablets).

Since the last couple of months were pretty crazy (COVID, genocides etc.) it is a little apocalyptical and sometimes (like the song ”demise of history”) even post-apocalyptic. The style of music is rather an old school/underground/90’s type of sound featuring production by L.O.B (loud obnoxious beats) and (Ilkay C.) himself.

His new album features a lot of dope hip hop artists including R.A the rugged man (who has a song with Notorious B.I.G) and enjoys hero status in the hip-hop underground scene. You can find everything from deep content, to punchline massacres, to great storytelling tracks on the album.

Ilkay C. has big plans for 2021 including the release of a collab album with his brother Sayedar from Istanbul, turkey. His new album will feature many great artists such as Chino XL, Ill Bill, Vinnie Paz (Jedi Mind Tricks), Canibus, Brother Ali, Akil the Mc, and plenty more dope artists. Look out for ”Underground Prestige” dropping next!

Monty Jaat: A Delhi Based Singer is Setting Trends in Haryanvi Music