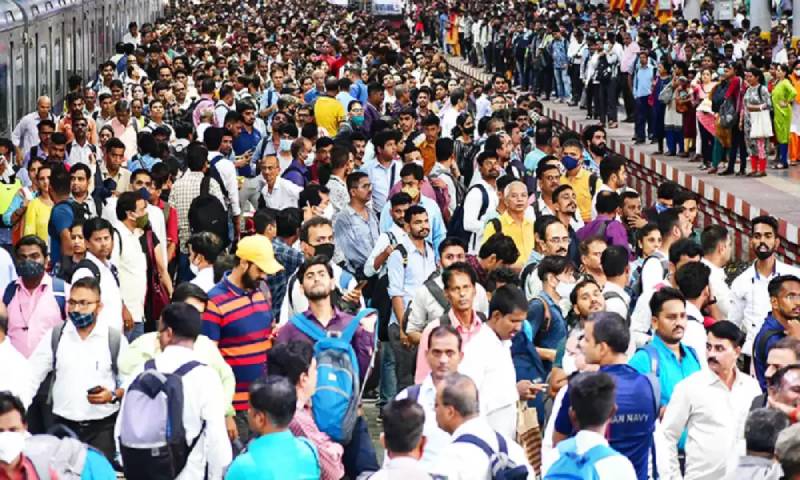 India will surpass China to become the world’s most populous country in 2023. Tuesday’s news from China that its population will fall for the first time in more than 60 years in 2022 raised the possibility that India will reach that significant milestone within a few months.

Both of these Asian giants, which have populations of more than 1.4 billion residents each, will be significantly impacted by this shift.

China’s population data were accompanied by one of its worst economic growth numbers in nearly half a century, highlighting the country’s significant challenges as the number of retired people grow and the workforce shrinks.

The “demographic dividend,” as economists and analysts refer to it, could continue to support India’s rapid growth as the number of healthy workers grows.

However, there are concerns that the nation may be left out. This is a result of India’s failure to provide employment opportunities for the millions of young job seekers already entering the workforce annually.

According to data from the Organization for Economic Cooperation and Development (OECD) for the year 2021, the South Asian nation has a population of over 900 million people who are working. The Indian government predicts that this number will surpass one billion in the next ten years.

However, experts cautioned that if policymakers do not create sufficient jobs, these numbers could become a liability. Given the lack of opportunities and low wages, a growing number of Indians are already not even looking for work, according to data.

According to World Bank data for 2021, India’s labor force participation rate, which is an estimate of the active workforce and people looking for work, was 46%, which is one of the lowest in Asia. In contrast, in the same year, the rates for China and the United States were 68% and 61%, respectively.

The numbers are even more concerning for women. According to World Bank data, India’s female work participation rate was just 19% in 2021, down from about 26% in 2005.

“India is sitting on a time bomb,” Chandrasekhar Sripada, professor of organisational behavior at the Indian School of Business, told. “There will be social unrest if it cannot create enough employment in a relatively short period of time.”

The independent Mumbai-based think tank Centre for Monitoring Indian Economy (CMIE), which publishes job data more frequently than the Indian government, reported that India’s unemployment rate in December was 8.3%. The US rate, on the other hand, was around 3.5 percent at the end of last year.

“India has the world’s largest youth population… There is no dearth of capital in the world today,” Mahesh Vyas, the CEO of CMIE, wrote in a blog post last year. “Ideally, India should be grabbing this rare opportunity of easy availability of labour and capital to fuel rapid growth. However, it seems to be missing this bus.”

Engineers aren’t for everyone.

One of the main causes of India’s unemployment crisis is a lack of high-quality education. Sripada stated that policymakers have had a “massive failure at the education level.” He also stated that Indian institutions place an emphasis on “rote-learning” rather than “creative thinking.”

Thousands of college graduates, including those with doctorates, end up applying for low-paying government jobs like “peons” or office boys because of this toxic combination of low education and a lack of jobs.

According to Sripada, the good news is that policymakers have recognized this issue and begun placing “reasonable emphasis on skill creation now.” He added, however, that it will be years before the effects of new policies can be seen.

To fully realize its economic potential, Asia’s third-largest economy must also create more jobs outside of agriculture. More than 45 percent of Indian workers are employed in the agriculture industry, according to recent government data.

According to a McKinsey Global Institute report released in 2020, the nation must create at least 90 million new non-farm jobs by 2030 in order to accommodate new workers. According to experts, many of these jobs can be created in the construction and manufacturing industries.

India has made some progress in boosting manufacturing by attracting international giants like Apple to produce more in the country, despite the rising tensions between China and the West. However, factories still only contribute 14% of India’s GDP, as stated by the World Bank.

The nation in South Asia is anticipated to be the major economy that is expanding at the fastest rate in the world for this fiscal year, which will end in March, with a GDP growth rate of 6.8%. However, a former central banker asserts that even this growth is “insufficient.”

“A lot of this growth is jobless growth. Jobs are essentially task one for the economy. We don’t need everybody to be a software programmer or consultant but we need decent jobs,” Raghuram Rajan, the former governor of the Reserve Bank of India, told a media company, last year.

“For gainful and productive employment growth of this magnitude, India’s GDP will need to grow by 8.0 percent to 8.5 percent annually over the next decade,” according to the Mckinsey report.