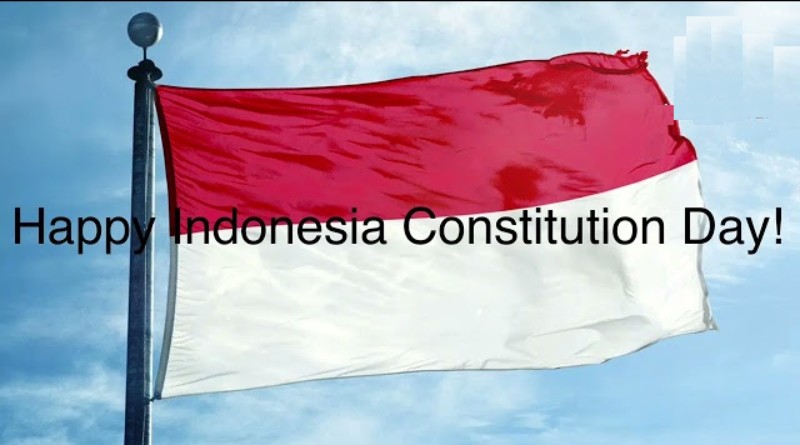 Indonesia Constitution Day is seen on the 18th of August to honor the birth of the Indonesian constitution, the 1945 Constitution, which was laid out at a meeting of the Preparatory Committee for Indonesian Independence.

The stipulation of the 1945 Constitution was to guarantee solidarity after the independence of the Republic of Indonesia was proclaimed on August 17, 1945. Assurance of Constitution Day is stated in Presidential Decree 18/2008 signed by President Susilo Bambang Yudhoyono on 10 September 2008.

The 1945 State Constitution of the Republic of Indonesia (Indonesian: Undang-Undang Dasar Negara Republik Indonesia Tahun 1945, commonly abbreviated as UUD 1945 or UUD ’45) is the supreme law and basis for all laws of Indonesia.

The constitution was written in June, July, and August 1945, during the last very long time of the Japanese occupation of the Dutch East Indies toward the finish of World War II. It was abrogated by the Federal Constitution of 1949 and the Provisional Constitution of 1950, however, restored by President Sukarno’s 1959 Decree.

The 1945 Constitution presents the Pancasila, the five nationalist principles, as the embodiment of the basic principles of an independent Indonesian state. It provides for a limited separation of executive, legislative, and judicial powers.

The governmental system has been described as “presidential with parliamentary characteristics.” Following significant upheavals in 1998 and the resignation of President Suharto, a few political reforms were set in motion, via amendments to the Constitution, which brought about changes to all branches of government as well as extra human rights provisions.

Indonesia’s Constitution Day is a proposal from the People’s Consultative Assembly of the Republic of Indonesia. To quote Detik, on September 10, 2008, President Susilo Bambang Yudhoyono (SBY) issued Presidential Decree No. 18 of 2008 concerning Indonesian Constitution Day.

This stipulation was signed by the Institute for Constitutional Studies, MPR, DPD, and different components of society. Constitution Day is certainly not a national holiday despite the fact that it is celebrated after Independence Day.

Different drafts of the contents of the 1945 Constitution had really been completed sometime before Independence Day. The Investigating Agency for Preparatory Work for Indonesian Independence (BPUPKI or Dokuritsu Zyunbi Tyoosakai) drafted the contents of the 1945 Constitution from May 29, 1945, to June 16, 1945. Soekarno filled in as Chairman of BPUPKI and Deputy Chair was held by Drs. Moh, Hatta.

BPUPKI consists of 19 members, 11 of whom are representatives from Java, 3 people from Sumatra, and 1 representative each from Kalimantan, Maluku, and Lesser Sundas.

BPUPKI was then dissolved and replaced with PPKI. On August 7, 1945, Japan announced the formation of PPKI or Dokuritsu Zyunbi Iinkai. The three founding figures of the state, specifically Ir. Soekarno, Mohammad Hatta and Dr. KRT Radjiman Wedyodiningrat went to meet the Great General Terauchi, Saiko Sikikan in Saigon. In the meeting, Ir. Soekarno was appointed as Chairman of PPKI and Mohammad Hatta as his deputy.

The 1945 Constitution is the premise of different regulations that apply in Indonesia. The 1945 Constitution was inaugurated through a session conducted by the Preparatory Committee for Indonesian Independence (PPKI). The PPKI session occurred at the Tyuuoo Sang-in Building or presently known as the Pancasila Building.

That day, there was likewise an adjustment of the contents in the 1945 Constitution on the grounds that PPKI members from Eastern Indonesia objected to a few articles which would in general be Islam-centric. Mohammad Hatta then, at that point, persuaded the then Muhammadiyah leader Ki Bagoes Hadikoesoemo to acknowledge the changes. The Islamic leader who was available additionally agreed, that it was the sake of the purpose of Indonesian unity.