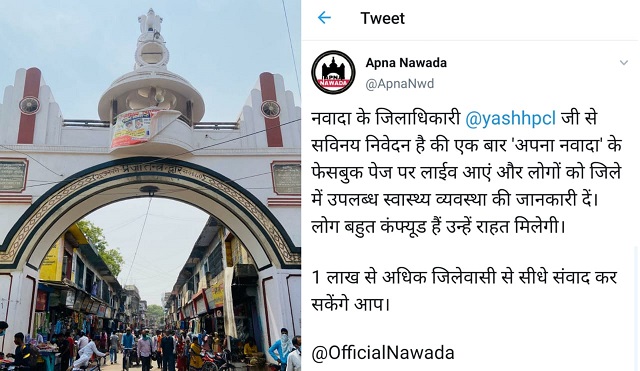 Coronavirus is raging in the country day by day and the number of deaths, as well as new cases, are increasing rapidly. Amid this violent storm of the pandemic, many things have come to a pause. Even the Prime Minister of India canceled all his rallies of West Bengal and is focussing on the solutions and chaired the meetings with the chief ministers of many states. In Bihar, Minister Shehnawaz Hussain assured the people to fulfill the need of Remedesivir. Just like other states and cities, the cases of COVID-19 are increasing daily, the number of cases recorded yesterday in the district was 173 and now the total number of cases has become 931.

The citizens of Nawada are distressed after seeing this rapid growth in the number of cases. In view of this, the local online portal ‘Apna Nawada’ of the Nawada district appealed to give information about the resources available for treatment and investigation of the corona. Taking this as a good suggestion, Nawada MP Chandan Singh urged District Magistrate Yashpal Meena on Twitter to come live on Facebook and inform the district dwellers so that people are assured. Accepting this suggestion of ‘Apna Nawada’, District Magistrate Yashpal Meena and Civil Surgeon in charge of Nawada came live on the official Facebook of the district and shared information with the people.

Apna Nawada was founded as a Facebook page by Suman Shekhar a few years back. An ordinary student of Delhi University belonging from a small town has now become a renowned name amongst the youths. He graduated from Delhi University last year and through his platform he gave voice to the unheard voices of society. With a mission and vision to give the citizen a platform to raise their voices, Suman Shekhar has come a long way in just a few years. He is having a team of extraordinary and enthusiastic people who along with him is bringing a revolution to society.

The ‘Apna Nawada’ web portal is constantly sending information related to corona and also appealing to people to be vigilant. Apana Nawada’s founder ‘Suman Shekhar’, who is a student of journalism at Delhi University, says that the most effective way to avoid this ‘global epidemic’ is vigilance. Lakhs of people are connected with his portal on which his team is spreading awareness to follow guidelines, maintain social distancing and wear masks. Apart from this, through Twitter and Facebook, they are also helping to provide the necessary treatment items to the patients of Corona. Not only for COVID-19 but Apna Nawada have always worked for the betterment of society and have helped all those people who reached to them. The team of Apna Nawada frequently writes letters and applications as well as submits a memorandum to the DMs and concerned authorities to look upon the matter which is unseen but is mandatory to work on. They organize campaigns for youths and work to curb the issue of unemployment, this team is working day and night to resolve the issues which are covered under the darkness of several protocols of the society.