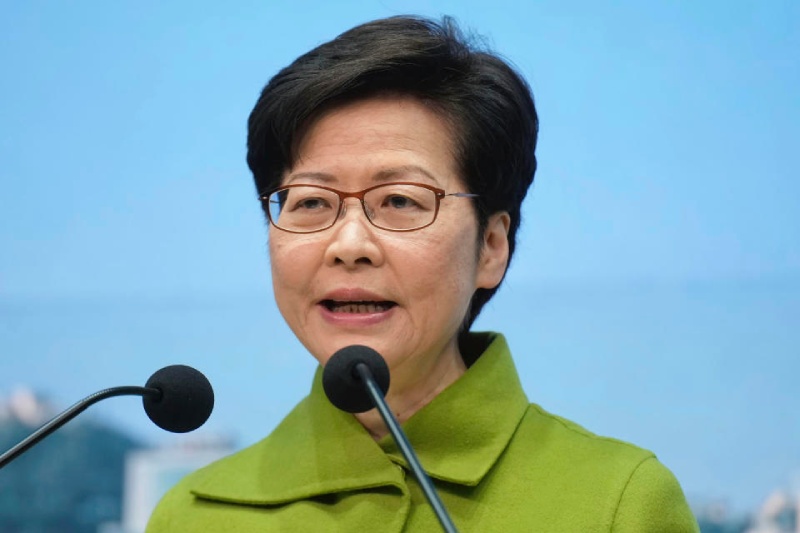 Carrie Lam, the Chief Executive who led the evolution of Hong Kong from liberal hub to tributary state of the Chinese Communist Party will leave, stopping a 42-year career that saw her change from social activist into an icon of Beijing’s authoritarian reach. Hong Kong Chief Executive Carrie Lam says she won’t run for the second term in a leadership election in the global financial hub because of what happened on May 8.

Hong Kong leader Carrie Lam, who has governed the global financial hub through the phenomenal disturbance against government fights and Covid-19, has said she won’t look for a second five-year term of office.

Carrie Lam, who survived gigantic fights against her government in 2019 and managed the implementation of an extreme national security law that subdued difference, says she won’t look for a second term.

Lam’s declaration came as the media said chief secretary John Lee, Hong Kong’s second most senior official, was set to leave to join the competition to supplant Lam in May and become the Chinese-ruled city’s next leader.

Her successor will be picked in May.

Lam came to power in 2017 promising to patch Hong Kong’s social rifts yet her five years in office saw it become more divided than ever.

Ms. Lam said on Monday that her family was her top priority. She added that the decision was her “personal wish and aspiration” and totally founded on her family considerations.

“I will complete my five-year term as chief executive on the 30th of June this year, and I will also call an end to my 42 years of public service,” Lam said at a news conference on Monday.

The election was pushed back from March 27 to give the government time to fight a COVID-19 outbreak that has tainted more than 1,000,000 of the 7.4 million individuals in the previous British colony.

Since Hong Kong got back to Chinese rule in 1997, it has had four CEOs, who all battled to balance the democratic aspirations of certain residents with the vision of China’s Communist Party leaders.

Speculation had swirled for months about whether she would look for another term, yet she said that her decision had been passed on to the central government in Beijing last year and was met with “respect and understanding”.

Gigantic fights against the territory’s government rocked Hong Kong in 2019 including calls for Lam to step down. Beijing responded in 2020 with an intense national security law that has smothered conflict in the semi-autonomous Chinese city.

Hong Kong media say that her No.2 John Lee is probably going to enter the race to succeed her. Chief Secretary Lee was the city’s head of security during the fights.

Hong Kong’s chief secretary John Lee, the number 2 official in the global financial hub, is set to leave to join a race in May to become its new leader, telecaster TVB said, refering to an unidentified source.

Hong Kong’s chief is elected by a committee comprised of lawmakers, delegates of different industries and professions, and pro-Beijing agents like Hong Kong deputies to China’s assembly.

One of the unfulfilled demands of the 2019 fights was the direct election of the city’s CEO.

Mr. Lee, 64, a security official during the delayed and frequently violent 2019 pro-democracy protests, was advanced in 2021 in a move a few examiners said signalled Beijing’s priorities for the city connected with security instead of finance or the economy.

Other potential competitors incorporate the city’s financial secretary, Paul Chan, as well as former leader Leung Chun-Ying, however, none has declared a bid.

Born in British-ruled Hong Kong in 1957 and becoming a lifelong civil servant and faithful Catholic, Ms. Lam took office in 2017 with a vow to join a city that was becoming progressively angry with Beijing’s tightening grip.

“There’s only one consideration and that is family. I have told everyone before that family is my first priority,” Ms. Lam told a regular press briefing.

“They think it’s time for me to go home.”

She declined to comment on potential candidates to replace her and said she had not decided on her future plans.

Ms. Lam said she had proposed a government restructuring to mainland authorities that would incorporate new policy departments.

Be that as it may, it would depend on the city’s next leader to decide whether to proceed with the plan, she added.

The city was at first scheduled to hold the chief executive election on March 27 yet the poll was deferred for six weeks until May 8 considering the city’s most obviously awful Covid flare-up.

Lam said that holding the polls as initially planned would present “public health risks” regardless of whether a committee of just 1462 individuals is involved.

Lee, 64, a security official during the delayed and frequently violent 2019 pro-democracy protests was promoted in 2021 in a move a few investigators said signalled Beijing’s priorities for the city related to security as opposed to financing or the economy.

The leadership election was pushed back from 27 March to give the government time to fight a Covid outbreak that has infected more than 1,000,000 of the 7.4 million individuals in the former British colony.

Since Hong Kong got back to Chinese rule in 1997, it has had four CEOs, who all battled to balance the democratic aspirations of certain residents with the vision of China’s Communist party leaders.

Ms. Lam said on Monday morning that she has not yet gotten any resignations from her ministers, a stage that cabinet members like Mr. Lee would have to make before running.

Ms. Lam likewise thanked Beijing for its help and trust and said her term was impacted by “unprecedented pressure” because of the 2019 protests and the COVID-19 pandemic.