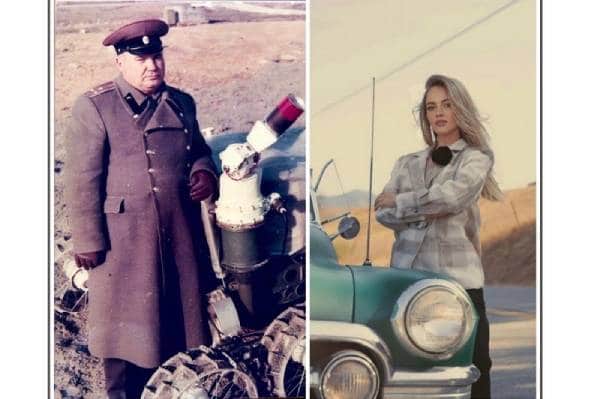 An American model with Russian roots, co-founder of the biotech startup “Create U future” Ellen Alexander has announced the release of her new book, “In Touch With Space”. This is the author’s second book, dedicated to those to whom we can thank for making flights into space no longer be a fairy tale. Counted among them is her grandfather, Nikolai Ivanovich Bugaev, a man who worked in the same team as the first cosmonaut, Yuri Gagarin, and the founder of practical cosmonautics, the distinguished designer and organizer of the work behind the creation of space-rocketry technology in the USSR, Sergei Korolev.

Today, nobody is surprised by the topic of space tourism: the first successful flights by the billionaires Bezos and Branson into low orbit in the summer of 2021 forced the entire world to applaud them and, more importantly, talk about the start of a new era of possible travel into space or into low orbit. Now, private space operators are competing to offer tourist trips into space, and Japanese billion Yusaku Maezawa has talked about recruiting a team to travel to the moon, where Elon Musk will send them in 2023.

One hundred years ago, Russian scientist Konstantin Tsiolkovskiy, who was at the forefront of cosmonautics, spoke about settling people on other planets, and that he was “…ready to allow inter-planetary communications within each solar system”. But even during the middle of the previous century, stories about man in space and programs for the exploration of the Moon, Venus, and Mars were considered by many to be fantasy. They were brought to life by the people that, 60 years ago, embodied mankind’s dreams about trips into outer space.

And just when those trips were put on the agenda, the problem of long-range communications became of particular importance: for improving the accuracy of rocket flights, it was necessary to conduct a correction, which only becomes possible when it’s in orbit. For communications, it was necessary to create back on Earth a network of ground measuring points, NIPs, which allowed cosmonauts in orbit to communicate by telephone with Mission Control Center. One of these, NIP-10, which provided radio and telecommunications between Earth and space, was commanded for many years by Nikolai Bugaev. He became the second person, after Sergei Korolev, to speak with cosmonaut №1, Yuri Gagarin, during his legendary flight into space. Afterwards, Gagarin sent Mr. Bugaev a photocopy of his image on the screen for space communications.

NIP-10, located near Simferopol, was created for the development of the USSR’s lunar program. It was at that location on October 4th, 1957, that communications with Earth’s first artificial satellite were established. The location was was also used for testing the test model of the Soviet lunar rover.

Ellen Alexander’s first book, “Nikolai Bugaev: The Radioman of the Cosmos Era”, dedicated to the pioneers of domestic cosmonautics, was released in May of 2021, the 60th anniversary of Gagarin’s flight into space. Her second book, “In Touch With Space” continues the theme of space exploration, which now attracts the attention of not only scientists: it has turned from an object of scientific research into one of a tourist destination.

“Now, when space tourism is actively developing, and statements about the settlement of humans on other planets no longer seem utopian, the topic of space exploration is relevant in a way like it never has been before. But it didn’t come from nowhere. I don’t want people to forget who was at the beginnings of the study of outer space. It was dedicated scientists like Konstantin Tsiolkovskiy, Sergei Korolev, Georgiy Babakin, and many others, who, like my grandfather Nikolai Bugaev, dedicated their lives to making flights beyond Earth possible. Today, it is very important that space unites people: its study requires cooperation and collaboration between scientists of various nations, and international crews living together like a family,” says Ellen Alexander.

The book “In Touch With Space” will be published in two languages, in Russian and in English, and will be available for purchase quite soon.

Ellen Alexander, is an American model with Russian roots, actress, author of songs and music, and co-founder of the biotech startup “Create U Future” and the Russian-American project “Global Difference Foundation”, which supports the development and continuation of future technologies. Ellen graduated from the Plekhanov Russian University of Economics in the faculty of international economic relations.

Related Topics:American modelBookCreate U futureIn Touch With Space
Up Next