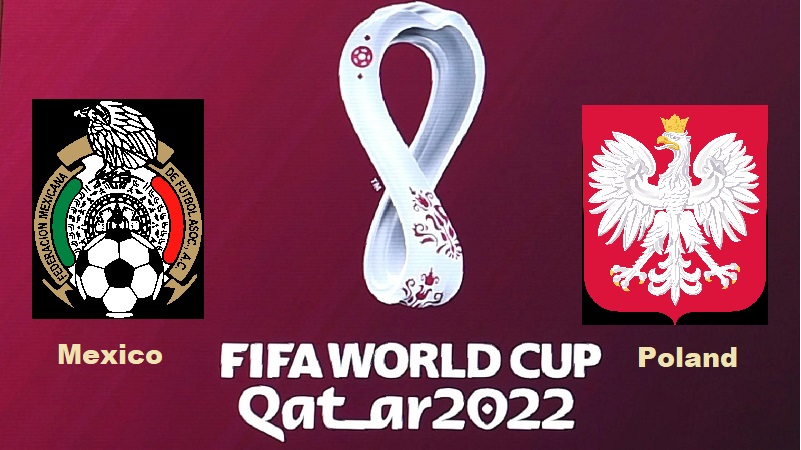 Mexico and Poland will go head to head at Stadium 974 in the opening match of Group C at the 2022 Qatar FIFA World Cup. Mexico are very inconsistent, and Poland did poorly in the Nations League against the big guns. At the World Cup, this should be a close game that could end in a draw.

Poland and Mexico play each other in their first FIFA World Cup Group C match. Mexico’s last warm-up match against Sweden ended in a disappointing 2-1 defeat. They will be looking to get back on track and play as they did in their qualifiers when they lost just twice in 14 matches and finished second in their group. With their 1-0 victory over Chile in their last match, Poland now has two victories overall. At 3 p.m. U.K. time, the match will take place at the 974 Stadium.

On November 22, Mexico will play Poland in their first World Cup match, this time against a team from Group C. Also during the World Cup in 1978, Poland defeated Mexico 3-1 in the first duel, which Argentina hosted. After that, there were two friendlies, making it three matches before this World Cup match in 2022. Stadium 974 in Ras Abu Aboud, Qatar, will host Mexico vs. Poland.

Mexico will begin their journey in Qatar with a matchup against Poland and Robert Lewandowski. They will need to overcome their difficulties prior to the World Cup and move on to the main event.

Since El Tri have been performing below expectations for some time, head coach Gerardo Martino is under pressure to produce results at the World Cup in order to keep his job.

Poland were in the same boat through the summer, but they were able to regain their composure with a few encouraging results in friendly matches just before the World Cup, and they may be set up for a successful performance.

Saudi Arabia and these two teams will be fighting for the second qualifying spot, behind expected Group C winners Argentina. This crucial match could go either way.

On Tuesday afternoon, Mexico’s attempt to advance to “el quinto partido,” or the fifth match, begins against Poland, which is just trying to get out of the group.

Mexico has failed to advance past the round of 16 in each of the previous seven World Cups. The last time El Tri reached a quarterfinal was in the home tournament in 1986. Additionally, Poland last advanced beyond the group stage in 1986. In 2018, their fate was decided after only two games.

Mexico is one of those national teams that are regular participants in this competition since its World Cup inception in 1930. This will be their 17th appearance, meaning they have only failed to qualify five times. Their way in the qualifications was very simple, as El Tri completed the group in the second position with 28 points, and with a 2-0 victory over El Salvador in the last round, they got their eighth consecutive participation in the World Cup. The Mexicans are aware that reaching the knockout stage for the eighth time in a row will be difficult in a group that also includes Argentina and Poland.

This will be the Poles’ eighth appearance in the largest international football competition, but they have already proven to be a more successful team than the Mexicans, despite being a high-caliber nation with a lot of talent. Specifically, “Biało-czerwoni” won the bronze medal in this competition in 1974 and 1982, respectively, but they failed to advance past the group stage in their subsequent three appearances. Poland didn’t get to Qatar right away, but they did get there by winning the play-off and beating Sweden 2-0 in the final before Russia got eliminated.

One of the three main CONCACAF-qualified teams for this World Cup was Mexico. Gerardo Martino will serve as head coach for his second World Cup, despite the fact that his performance has caused him significant discomfort. Mexico’s chances of making the Round of 16 depend on this game.

Only two defeats out of a total of 14 games in Mexico’s World Cup qualifiers prevented them from reaching the finals. The team will want to go further than the 1/16 finals at this point. They lost every time they got to this point in seven consecutive World Cup tournaments.

Since August, Raul Jimenez has not competed for either club or country. The Wolves striker decided to continue his recovery with the national team’s medical staff in Mexico after a tumultuous preseason.

Six days before the World Cup opener, Jimenez played in the second half of their El Tri’s friendly against Sweden. It remains to be seen whether Gerardo Martino takes a chance with the number nine right away.

As a result of their 3-0 loss to Sweden in their final group game of the 2018 FIFA World Cup, Mexico were forced to play Brazil in the Round of 16.

They lost that game later on, but they will want to improve on their performance four years ago, with a lot of the country’s hopes likely resting on the shoulders of the impressive Hirving Lozano.

Poland is determined to recover from their poor performance at the 2018 World Cup when they were easily eliminated from their group and entered as one of the candidates to qualify for the next round. A disappointing performance in which Robert Lewandowski, too, failed to score.

The fact that Poland’s national team is entirely dependent on Robert Lewandowski is the issue. The team is nothing more than an average group with little potential if he does not perform at his usual high level.

When it comes time for Czeslaw Michniewicz to select the best players for his hybrid system, he is likely to have a squad that is fully healthy. On the final weekend of Premier League play, Matty Cash of Aston Villa felt pain in his shoulder. However, the Slough-born fullback quickly dispelled any fears.

At the previous World Cup, Poland had a very frustrating season because they couldn’t get out of their group. Their losses to Senegal and Columbia sealed their fate, but they will use that disappointment as motivation in Qatar.

Due to how they started in Russia, the Poles will want to get off to a strong start here because they are in a tough group but have one of the best finishers in the world in striker Robert Lewandowski.

These two teams have only met once before, in the World Cup group stage in 1978. Zbigniew Boniek scored twice as Poland won 3-1.

Mexico vs Poland: Time by State in the US

Where can I stream Mexico vs Poland in the UK?

Mexico vs Poland can be streamed live on BBC iPlayer and the BBC Sport website & app.

How to watch or live stream free Mexico vs Poland in the US?

This Qatar World Cup matchup between Mexico and Poland in 2022 will be broadcast in the United States on fuboTV (7-day free trial).

Mexico vs. Poland could be a very important matchup in Group C. Argentina, one of the pre-tournament favorites, is also in the group, so it’s possible that these two are competing for second place, which means another spot in the Round of 16. The two teams come into this on the back of a conflicting run of form and that could well prompt a nervy affair here with such a great amount in question. Expect a low-scoring matchup because Poland has only scored one goal in three of its last four games and only two goals in the other.

Mexico will undoubtedly prevail in the battle for possession, regardless of the final score, primarily because Poland do not require the ball to be at its best. Crosses into the box have been Poland’s primary goal route under Michniewicz and his predecessor Paulo Sousa.

Although it may not be the most effective or sophisticated strategy, Robert Lewandowski is an excellent target for any kind of delivery. However, Martino is able to counter this airborne assault with the impressive Cesar Montes, who stands at 6’3, unlike Mexico teams in the past.

Martino has referred to himself as “public enemy number one in Mexico,” but if he can lead El Tri to a victory that is expected of them, he may start to fall off that list.

Absolutely, this will be a close contest; the significance of this match is nothing less than a potential spot in the knockout phase.

Poland’s team certainly has the talent, but they rarely stand out in major tournaments. Because of this, we are backing Mexico in this match, and betting on over 2.5 goals at halftime is a good option given the attacking potential of both teams.

Czeslaw Michniewicz, the head coach of Poland, has selected a 26-man world cup squad. Lewandowski leads a team with a lot of talent.