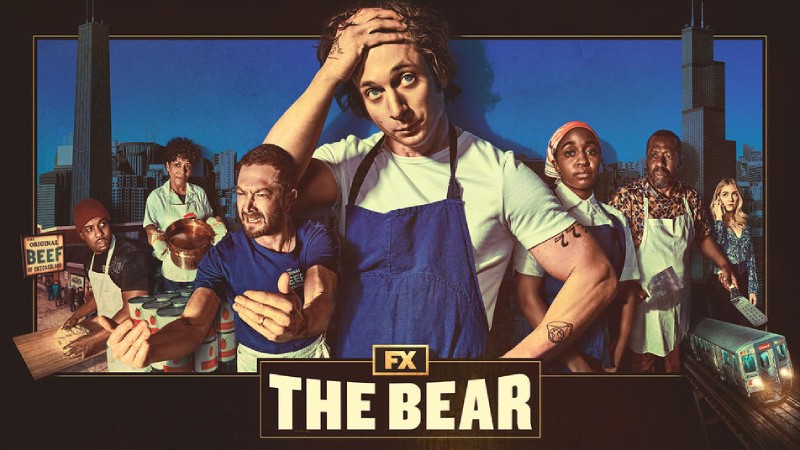 Disney has announced that the profoundly expected unique satire series “The Bear,” is coming to Disney+ in Australia and New Zealand on 31st August. Every one of the eight episodes will be released immediately.

Between countless reboots and recoveries and hotly-anticipated book adaptations, The Bear flew generally under the radar, that was until the FX-made show dropped on Hulu in the US last month and quickly had audiences gripped.

Prepare to add “Yes, chef!” to your day-to-day repertoire on the grounds that The Bear, a new, widely acclaimed drama set in a busy hole-in-the-wall style sandwich shop in downtown Chicago, will at last show up in Australia one month from now.

The series debuted in the US in June this year to stellar reviews, pulling in a noteworthy 100% basic endorsement rating on Rotten Tomatoes, and will hit Disney+ on August 31. It’s as of now been hailed by certain critics as the best TV series of the year.

The drama series recounts the story of a top chef, played by Shameless’ Jeremy Allen White, who leaves the world of fine dining and returns to his hometown to run his family sandwich shop after the tragic death of a loved one.

Presently, it’s been announced the hot new series will advance toward Australia, look on for every one of the details.

“The Bear” follows Carmen “Carmy” Berzatto (Jeremy Allen White), a young chef from the fine dining world, who returns home to Chicago to run his family sandwich shop – The Original Beef of Chicagoland – after a heartbreaking death in his loved ones. A world away based on what he’s utilized to, Carmy should adjust to the soul-crushing real factors of private business ownership, his strong-willed and unmanageable kitchen staff, and his stressed familial connections, all while wrestling with the effect of his brother’s suicide.

“The Bear” is about food, family, the madness of the grind, the beauty of Sense of Urgency, and the steep slippery downsides. As Carmy battles to change both The Original Beef of Chicagoland and himself, he works close by an unpleasant around-the-edges kitchen team that eventually uncovers themselves as his picked family.

“The Bear” was made by Christopher Storer (Ramy, Eighth Grade), who additionally fills in as executive producer close by Joanna Calo (BoJack Horseman, Undone), Hiro Murai (Atlanta, Station Eleven), and Nate Matteson (Station Eleven, The Choe Show) of Super Frog and Josh Senior, with Tyson Bidner (Ramy) filling in as producer and Matty Matheson as co-producer. The series is produced by FX Productions.

Sydney Adamu (Ayo Edebiri, Big Mouth) joins the kitchen – a “brigade” Carmy is quick to call it, styled on his familiarity with fine dining kitchens – and rapidly rejects the “toxic hierarchical shitshow” that the new proprietor has transformed it into.

While audiences know all about the interior activities of current restaurants and the egos of numerous chefs thanks to Hell’s Kitchen and Chef’s Table, The Bear has been praised for its scarily precise depiction of what hospitality life is truly similar to. The tense and frighteningly quick developments in the profoundly bound Original Beef kitchen area are a far nearer representation of real work environments in commercial kitchens.

Furthermore, it has gotten high recognition from critics worldwide since it’s not just about a kitchen.

“The Bear is preoccupied with masculinity,” wrote critic Sophie Gilbert in The Atlantic, “and almost anthropological in its analysis of the ways in which men and male-dominated cultures are set up to fail.”

The show has rapidly become one of the most well-known TV events of the year, spreading through word-of-mouth and critical acclaim. It’s been broadly praised by those in the restaurant business for its interrogation of modern hospitality work culture, drug use, and mental health issues.

It’s being described as a “painfully accurate” representation of life over a hot stove. “I could barely get through The Bear,” one previous Michelin star chef wrote. “Not because I thought it was bad television—but because it was the most accurate portrayal of life in a restaurant kitchen I’ve seen in a while.”

Director Christopher Storer, most popular for his work in the delightful 2019 comedy series Ramy, is a devoted cook and has recently worked on on-screen food projects. He joins profound colors with rapidly moving shots to underscore the kitchen’s chaos. And baker Marcus (Lionel Boyce) even enrolled in a two-week cooking class to learn how to work in a kitchen.

In any case, regardless of whether you have any involvement with working in restaurants, there’s sufficient comedy, drama, and tension to keep you hooked.

This week FX Productions announced it was recharging the show briefly season after its underlying run of eight 30-minute episodes.

“The Bear has exceeded our wildest creative, critical, and commercial expectations,” the network’s president, Eric Schrier, said on Thursday. “We can’t wait to get to work on season two.”

Show co-runners Storer and Joanna Calo will continue working on the show in the following season.

“We are so grateful to FX, our insanely talented cast, our crew who worked hard, fast, and in the dead of winter, not to mention everyone who watched. And we can’t wait to bring you all back to The Bear in 2023,” they said in a statement.

WHAT IS THE PLOT OF ‘THE BEAR’?

Per the show’s synopsis, chef Carmen Carmen “Carmy” Berzatto tracks down himself “a world away based on what he’s utilized to” when he’s compelled to move back home to run the family business.

“Carmy must balance the soul-crushing realities of small business ownership, his strong-willed and recalcitrant kitchen staff, and his strained familial relationships, all while grappling with the impact of his brother’s suicide.”

With a gritty look at the pressure cooker that is working in a commercial kitchen, audiences can expect an extraordinary however exciting watch frequently delivered at a Gordon Ramsay-level of annunciation and profanity.

WHERE TO WATCH ‘THE BEAR’ IN AUSTRALIA

Australian audiences can watch the series on Disney+ from August 31.

We, at last, have the affirmation that The Bear will be accessible to stream in Australia on Disney+.

While Aussie viewers should trust that the series will premiere on August 31, the good news is each of the eight episodes will drop on the double.