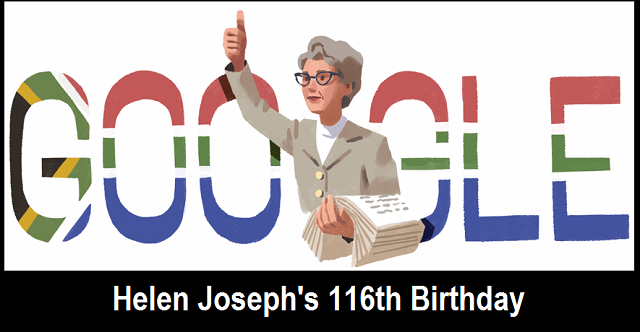 Who was Helen Joseph?

In 1923 Helen was allowed to the University of London to study English; she graduated from King’s College London in 1927. In the wake of working as a teacher in India for three years, she expected to get back home via South Africa.

Helen Joseph graduated with a degree in English from the University of London in 1927 and afterward left for India, where she educated for three years at Mahbubia School for girls in Hyderabad.

In around 1930, Helen Joseph left India for England through South Africa. Notwithstanding, she settled in Durban, where she met and married a dentist, Billie Joseph, whom she later divorced. In the port city of Durban, she became friendly with Dorothy Stubbs, a teacher at Clifton School (Durban), whose father Harry Stubbs was headmaster.

At the point when Miss Stubbs left the school to get married, her dad offered the vacant position to Helen Joseph. She taught at the school from 1930-1931. In Durban, she met and in 1931 married Billie Joseph, a Jewish dentist 17 years her senior.

Helen Joseph served in the Women’s Auxiliary Air Force during World War II as a data and welfare officer. After the war, she divorced Billie Joseph. She trained as a social worker and began working in a community centre in a Colored (mixed race) territory of Cape Town.

In 1951, Helen Joseph initially met Solly Sachs when she went after the job of Secretary-Director of the Medical Aid Society of the Transvaal Clothing Society. At that point, Sachs was the head of the Garment Workers’ Union.

Helen Joseph was a founder member of the Congress of Democrats (COD), a white political partner of the African National Congress (ANC), and one of the pioneers who read out the clauses of the Freedom Charter at the Congress of the People in Kliptown in 1955.

Helen Joseph’s fearless opposition brought about government-led attempts to silence her yet notwithstanding the backlash, Joseph stayed active, taking in the children of exiled or detained political activists, including Nelson and Winnie Mandela’s children.

Out of appreciation for the historic women’s march on Pretoria and the steady advocacy of women like Helen Joseph, August 9 was remembered annually as National Women’s Day in South Africa.

Clifton School (Durban) named a library after Helen Joseph who educated there when she initially came to South Africa. The library contains an extraordinarily commissioned representation.