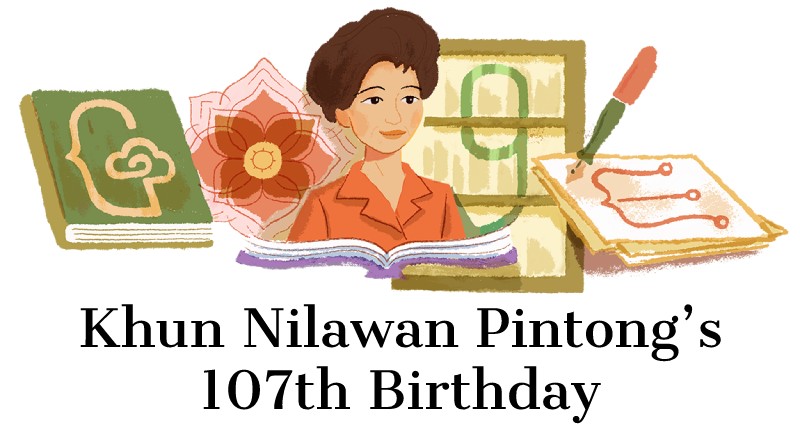 Google Doodle celebrates the 107th birthday of Thai feminist Khun Nilawan Pintong, who is best known as the founder of the Ounakorn Center, and Satree Sarn Magazine, Thailand’s first women’s magazine, on December 6, 2022.

Nilawan Pintong was born in Bangkok on December 6, 1915. She was a Thai feminist whose advocacy for women’s rights earned her the moniker Steel Lotus Blossom. She is best known as the founder of the Ounakorn Center and Satree Sarn Magazine, Thailand’s first women’s magazine that encouraged women to get involved in their community affairs.

Khun Nilawan Pintong also became the first Thai recipient of the Ramon Magsaysay Award for Public Service in 1961. “Thai women a new and creative role in nation-building” was the reason she received the award. She and the other recipients received a certificate, a gold medal, and $10,000 as part of the award.

After Nilawan Pintong’s mother died, her father became a monk and provided her with a Buddhist education. Having been educated in the spirit of charity and service since young, Nilawan sought after her fantasy about being an educator and procured her certificate from the Bethaburi School of Teacher Training in Bangkok. She graduated from Chulalongkorn University in 1936 with a Bachelor of Arts degree in Modern Languages (English and French) and First Honors in English.

Khun Nilawan Pintong taught for a year at a secondary school under the Ministry of Education. After that, she became chief of the Official Publications Section, and later chief of the Foreign Press Section, both under the Department of Foreign Affairs.

With the assistance of three friends, Khun Nilawan Pintong established the fortnightly magazine Satree Sarn Magazine in 1947 despite the lack of funds. The magazine’s content included everything from art and literature to fashion and crafts to women’s fashion. In a range of three years, it became Thailand’s most broadly read magazine until its last publication in 1996 because of financial issues.

After that, Khun Nilawan established two additional magazines: a youth magazine called Darun Sar and a weekly news publication called Sapdha Sarn. Khun Nilawan and Daroon Sarn founded the Preeya Club for children, which offered classes in arts and crafts and other activities for children.

Khun Nilawan Pintong collaborated with the Thai Library Association to raise the standards of library work in Thailand and took on additional projects, including translation services and a weekly radio program. She was likewise the Society of Printing president for a time.

She held the offices of president and secretary of the PEN Center of Thailand, among other things; as the Thai Foundation for Journalism Education’s executive secretary; chairperson of the Executive Committee of the National Council of Women of Thailand, and member of the National Council on Education; member of the Thai Merchants Association; VP of the Pan Pacific and Southeast Asia Women’s Association.

Khun Nilawan Pintong established and led the Ounakorn Center, which also housed foreign visitors working in related fields, in order to provide a home for a number of homeless non-governmental organizations (NGOs).

She was the first Thai recipient of the Ramon Magsaysay Award for Public Service, also known as the “Nobel Prize of Asia,” in 1961. This award recognized her work for women’s empowerment and nation-building.

On December 6, 2022, Google featured a Doodle on its homepage for celebrating Khun Nilawan Pintong’s 107th Birthday.