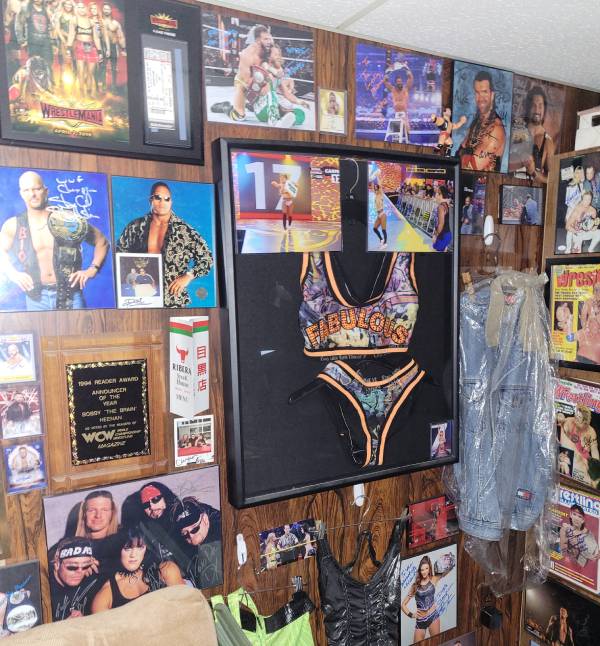 The Pro Wrestling Mini Museum is an online museum dedicated to the rich history professional wrestling, where fans can find photos and signed memorabilia of the stars and events they love.

Founder Mike Parker started with a standard collection of 8 x10s and magazines. His collection got bigger through the years as he was inspired by other wrestling museums and stores like the Pro Wrestling World Museum in Allenton, Pennsylvania, and Adventure Land Store in New Jersey.

In 2015, Parker started a Wrestling Wall with some of his favorite signed photos. When Pro Wrestling World was closing in January 2018, customers were allowed to fill out a request form and have the opportunity to buy items for themselves. Parker picked up a few items he always admired, and these formed the basis for the museum.

Taking his showcase to the next level, the Pro Wrestling Mini Museum took shape. Items like classic signed magazines and ring/TV-worn pieces were added. Many ring worn items do not see the light of day except for special circumstances once they are in the hands of private collectors. Parker says “That’s not a philosophy I agree with. As I fan myself, I want to see everything I can and with the museum, I can share these treasures with fans around the globe”.

Parker further elaborates “I have something for everyone.” Fan of 80’s WWF? I’ve got a dedicated area for that. Fans of the legendary Four Horseman? I’ve got it covered. Classic territories like World Class Championship Wrestling? I’ve got a section for them too. Of course, I wouldn’t forget the great ladies of the sport, they’ve got their own wing. All in all, I feel I’ve created an immersive experience fans can enjoy anywhere, anytime. I take great pride in the fact that not only has this resonated not only with fans but personalities from every major company are checking us out on social media”.

More information can be found at http://www.pwmuseum.net.

One on One Business Coaching in India