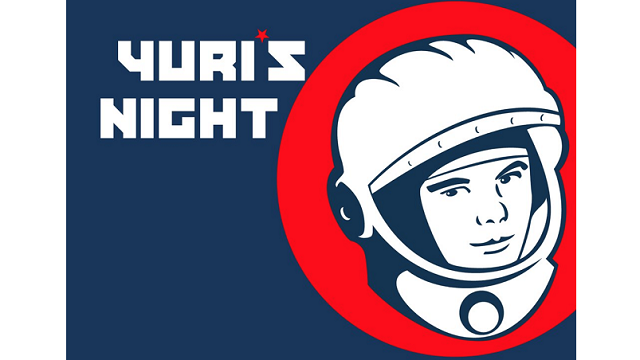 Yuri’s Night is an international celebration held every year on April 12 to honor achievements in space exploration. It is named after the first human to launch into space, Yuri Gagarin (Юрий Гагарин), who flew the Vostok 1 spaceship on April 12, 1961. Yuri’s Night is frequently called the “World Space Party”. It is a celebration of the first human space flight by Yuri Gagarin and the anniversary of the first Space Shuttle launch.

The launch of STS-1, the first Space Shuttle mission, is additionally honored, as it was launched 20 years to the day after Vostok 1, on April 12, 1981. In 2011, Yuri’s Night was celebrated at more than 567 events in 75 nations on seven landmasses.

Every year, Space Foundation hosts an event that praises these accomplishments of the past and exhibits the significance of investing in the future of space.

The objective of Yuri’s Night is to build public interest in space exploration and to inspire a new generation of explorers. Driven by space-inspired artistic expression and culminating in a worldwide network of annual celebrations and educational events, Yuri’s Night makes a global community of youngsters focused on molding the future of space exploration while creating responsible pioneers and innovators with a global perspective. These global events are an exhibit for elements of culture that embrace space including music, dance, style, and art.

Yuri’s Night is a grassroots annual event praising all that humankind carries with us as we investigate the cosmos: music, art, science, culture, and each other! We use space to unite the world, to engage the best parts of what our identity is, and give a vision of where we are going.

Yuri’s Night was made in 2000 by Loretta Hidalgo Whitesides, George T. Whitesides, and Trish Garner. The first Yuri’s Night was held on April 12, 2001, precisely 40 years after the launch of Vostok 1. Since 1962, April 12 has been celebrated in Russia (previously the Soviet Union) as Cosmonautics Day (День Космонавтики) and since 2011 globally as the International Day of Human Space Flight.

The 2007 event in the San Francisco Bay Area was held at NASA Ames Research Center at Moffett Field in Mountain View, CA. The event included artistic installations, technology shows, and DJ music proceeding through sunrise of the next day.

This year numerous local events (including LA and Space Coast!) have been canceled to help moderate the spread of the Covid.

This year, Yuri’s Night is virtual and in your hands as an interactive “choose your own adventure” event. You will help our pioneering astronaut, Astrid, who was motivated by Yuri Gagarin and each space pioneer that has followed, as she looks to be the first human on Mars. Astrid runs into some difficulty en route and it’s dependent upon you to assist her with making it to Mars!

Yuri’s Night will include various exciting events and exhibitions all through the evening. Of the activities you can expect, OK Go will make a big appearance a brand new cooperative music video project made with the assistance of fans from home during the pandemic.

“The book shares a powerful vision for a spiritual path that can bring communities together during hard times and inspire them with a vision of bringing life to the stars,” the Yuri’s Night team said in a statement emailed to Space.com. “That vision seemed fitting this year,” Loretta Whitesides said in the statement.

The Yuri’s Night Global Webcast will associate Yuri’s Night fans all throughout the world with many astronauts, celebrities, musicians, space professionals, and more in an enormous celebration of human spaceflight around the world. Go to Youtube Channel to subscribe and get notifications about this live event!

Yuri’s Night is a free event, yet for the individuals who want to get a bit nearer to the activity, there are two paid experience alternatives: a “Backstage Pass,” which incorporates a pre-show party, celebrity guest video chats, and an after-party, and a “VVIP package,” which also incorporates “swag,” drinks launched to your home and a private online party with private astronaut Richard Garriott.

You can become familiar with these options on the Yuri’s Night website. You can even host your own virtual watch party close by the Livestream and appreciate the event with your friends over Zoom.

Yuri’s Night is coordinated on a global level by an all-volunteer “Executive Team”, which offers strategic and promotional support to Yuri’s Night events around the world. Individualcoordinators are responsible for registering and running their local events.

Today, the United States and Russian space programs work agreeably on the International Space Station, a perpetual base in orbit around Earth.

In Russia and other previous Soviet countries, April 12 is praised as World Cosmonautics Day. In 2011, the United Nations put to the side the day as International Day of Human Space Flight. It’s additionally referred to all the more casually as Yuri’s Night. You can celebrate each of the three with resources from our collection on Celebrating Space Exploration.