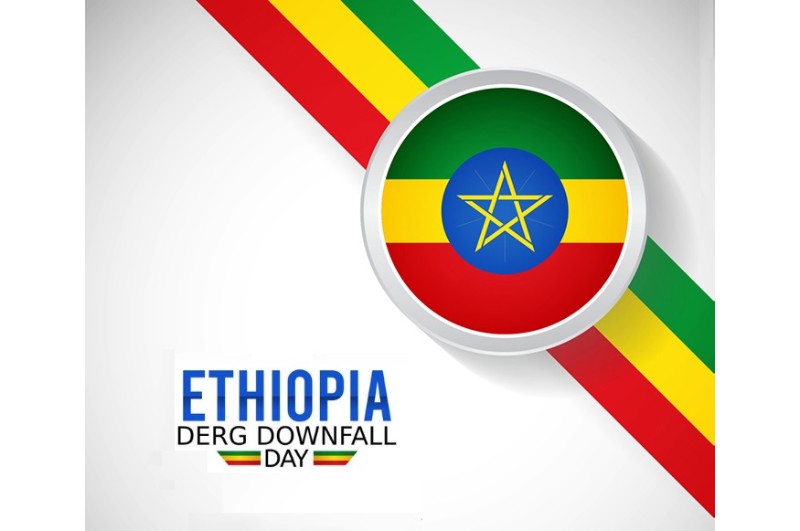 Derg Downfall Day, Ethiopian National Day and marks the end of the Derg regime in 1991, is celebrated on May 28 every year. This public holiday honors the end of the Marxist junta that ruled the country from 1974 to 1991 and the defeat of the tyrannical, Communist Derg military regime by forces that opposed it for many years during the prolonged civil war.

The oil emergency of 1973 had prompted strikes and famine in Ethiopia and opinion had betrayed the Emperor. In 1974, a provisional military administrative council introduced a socialist military government.

On 12 September 1974, Haile Selassie was dismissed in a coup d’état by the Derg (which implies committee in Amharic), a Soviet-supported military dictatorship led by Mengistu Haile Mariam. The country was renamed the People’s Democratic Republic of Ethiopia and the government was canceled in March 1975.

The Derg regime was marked by the Ethiopian Civil War that was kept during the regime, with at least 1.4 million deaths. The regime was additionally in control during the 1980s when a catastrophic famine assaulted the country and carried it to the notification of the international community.

The council was referred to famously as the Derg (the Ge’ez word for “committee” or “council”). The Derg regime was notorious for its savagery. A huge number of the regime’s rivals were detained and executed without trial (the Red Terror). Resistance to the regime started a civil war.

In the late 1980s, the opposition rebel forces became more organized under the Ethiopian People’s Revolutionary Democratic Front (EPRDF) and the change in leadership in the Soviet Union implied that the Derg would not get any financial or military help from any country in the Soviet bloc.

The Derg was officially abrogated in 1987, following the adoption of the new Soviet-style constitution. In any case, the socialist regime in Ethiopia at long last collapsed on May 28, 1991, when the Ethiopian Peoples’ Revolutionary Democratic Front forces entered Addis Ababa.

In May 1991, following huge regional increases in the country, EPRDF powers progressed on Addis Ababa. With no mediation from the Soviet Union, Mengistu escaped the country to Zimbabwe on 21 May 1991, finishing the Derg regime.

Derg Downfall Day is kept to pay homage to the individuals who gave their lives to oppose and defeat the oppressive Derg regime. It is a day full of speeches and is an off-work day. Monuments are visited all over Addis Ababa, and many come to see them, recollect the battle for freedom, and lay laurels down in respect for the “martyrs”.

To mark this day, talks are made to honor the individuals who died in the civil war battling for the defeat of the Derg.

Ethiopia doesn’t observe Independence Day since it has never been a colony, therefore Derg Downfall Day was proclaimed as Ethiopia’s national holiday.