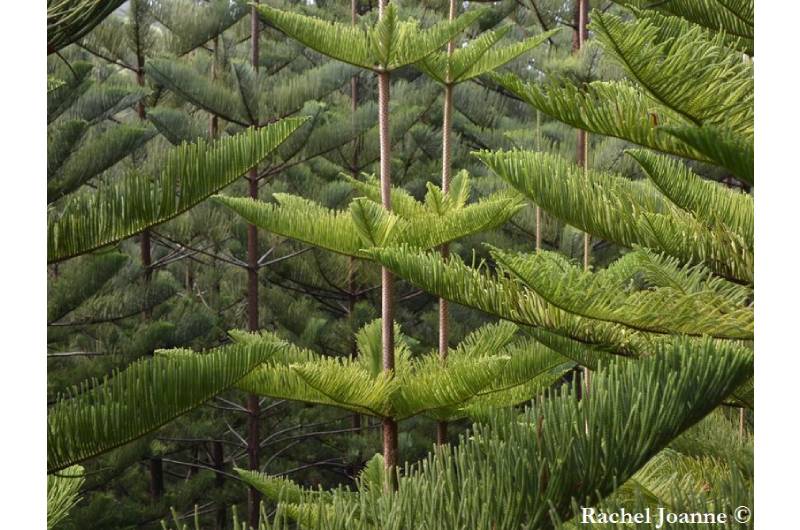 Although the natural range of Norfolk Island pine is confined to that tiny speck of 34 square kilometers of land in the South Pacific midway along a line between New Caledonia and New Zealand, this species and monkey puzzle tree (Araucaria araucana) are the two most familiar araucarias in cultivation outdoors in warm and moderate climates, contributing some of the most architectural tree forms to the cultivated landscape.

Norfolk Islands pine is also a common greenhouse subject and indoor accent plant in cooler climates. It is as well one of the most characteristic landscape features of its native Norfolk Islands. Despite the narrowness of this natural range, it is a common tree on the island, and there is no evidence of restricted genetic variation (at least no more so than in other species of Araucaria). In fact, there are more cultivars of Norfolk Island pine, varying in needle length, shape, and color, than there are for all of the other species combined (except for monkey puzzle tree, which has a similar number).

While mature foliage is rare in cultivation and effectively absent indoors, the striking differences between juvenile and adult foliage are responsible for the species name (Latin for “different leaves”), especially in comparison to the much more uniform monkey puzzle tree, the only other Araucaria familiar to botanists at the time that Araucaria heterophylla was described. Because of earlier confusion with the similar Cook pine(Araucaria columnaris), this species has been mistakenly called Araucaria excels, a synonym of that New Caledonian species.

Cultivated plants sold as Norfolk Island pine are often Cook pines, especially those originating as nursery stock from Hawaii. Norfolk Island pine has a much wider branch spread, longer leaves, smaller pollen and seed cones, and narrower cotyledons (only 1.5 mm wide versus 3.5 mm) than Cook pine. Despite their strong similarity, the two species are not particularly closely related. DNA studies show that Cook pine is closest to the other New Caledonian species, whose relationships are too messy to be resolved as yet, while Norfolk Islands pine is sister to the whole New Caledonian group and thus no more closely related to Cook pine than to of the other species.