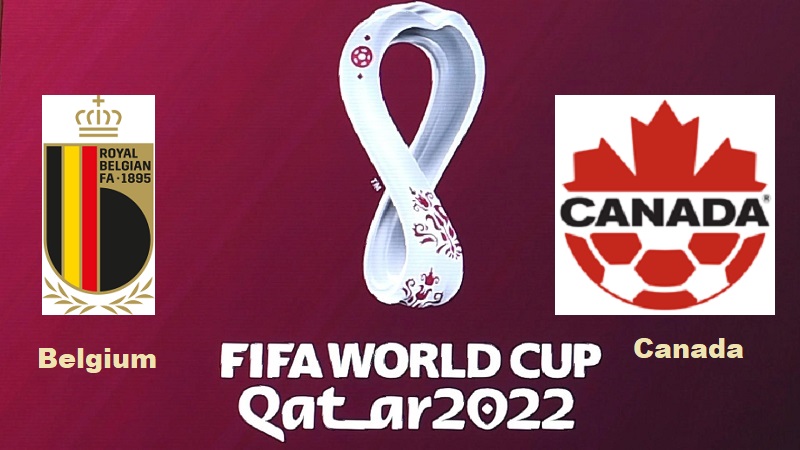 The 2022 FIFA World Cup’s Group F matchup between 2018 World Cup bronze medallists Belgium and history-making Canada will take place on November 23 at Ahmad bin Ali Stadium. Croatia and Morocco are the other two teams in that group.

With six wins and two draws in the qualification group, Belgium had no trouble qualifying for Qatar. That will be the third successive World Cup appearance for the national team. Belgium had a solid 2022 campaign, winning three games, drawing two, and losing one. Belgium defeated Poland 1-0 on the road in the previous match.

Belgium ought to score a lot of goals. In the last three matches, they scored eight goals.

The third World Cup for Roberto Martinez’s team will be attended by eight players. Atiba Hutchinson, Canada’s captain, is the only member of John Herdman’s team who was actually alive when the Canucks played in the last World Cup (in 1986, when he was three years old, he didn’t quite make the cut).

Since Canada has only competed in the World Cup once in its football history—in 1986 in Mexico—it is crucial that they qualify for Qatar relatively easily. However, Canada’s performance this year has been much worse, as they have lost three of their last five matches. Honduras defeated Canada 2-1 on the road in the previous match.

At the Ahmad bin Ali Stadium, Belgium and Canada will compete in the FIFA World Cup’s second match of Group F. Belgium enters this match having suffered an unexpected loss to Egypt by a score of 2-1, whereas Canada defeated fellow finalists Japan by a score of 2-1 in their final warm-up match. Because this tournament is the last chance saloon for many of their aging stars, Belgium will be eager to rebound from two defeats in their previous two matches. At 6 p.m. U.K. time, the match begins.

Belgium’s performance at the last World Cup was admirable. The Red Devils are returning to the task at hand and hoping to perform even better at the tournament in Qatar in 2022. Belgium’s national soccer team is a strong contender to win the 2022 FIFA World Cup, ranking second in the world in football. Roberto Martinez, the head coach, is looking forward to another strong start in the big event. Belgium’s goal for this year’s World Cup is to repeat their group-stage dominance from last year.

Belgium are a favorite, but they are not as big as other national teams. They lost a recent friendly game 1-2 to Egypt, and they also lost a game 0-1 to the Netherlands in September during the UEFA Nations League.

Although Belgium isn’t considered a title contender, they should be good enough to compete in the quarterfinals. Kevin de Bruyne is without a doubt the leader of the Belgian national team. Romelu Lukaku, Youri Tielemans, and young star Charles De Ketelaere ought to also be important players.

The pressure will be on Belgium to get off to a strong start in this tournament, despite the fact that they have lost consecutive matches in their previous two outings.

Despite the fact that the Belgians have a very strong squad with a lot of talent, Roberto Martinez may find it difficult to get a tune out of his team without Romelu Lukaku, who is out with a knee injury.

The Canadians breathe a sigh of relief at their inclusion in the 2022 World Cup. They have always anticipated returning to the largest football arena in the world. Having a place among the rest in Qatar will be euphoric for the visitors, even though they wouldn’t have anticipated playing Belgium at the beginning of the tournament. Although it won’t be easy to beat other Group F teams like Belgium, Morocco, and Croatia, Canada’s participation in this level of World Football means everything to the traveling team and the millions of spectators at home.

Although they are the weakest of the three North American favorites, Canada performed admirably in the CONCACAF Qualifiers.

From this group, Canada shouldn’t be good enough to advance to the next round. While Belgium and Croatia are unquestionably superior, they may contend with Morroco for third place. Despite this, Canada has made significant progress in recent years, and they have two outstanding talents in Alphonso Davies and Jonathan David, who could make them the best team in the coming years.

Canada made a great effort to qualify for the FIFA World Cup in 2022. This will be only the second time they have qualified for a major sporting event in their history; the last time they did so was in 1986.

Alphonso Davies and Jonathan David are superstars for the Canadians, who have only lost one of their last four games. However, Jonathan David is a big injury doubt for this first match in Qatar.

When and what time does Belgium vs Canada match start?

Where will Belgium vs Canada match take place?

The match between Belgium and Canada will take place at Ahmad bin Ali Stadium in Al Rayyan, Qatar.

In the UK, which channel broadcasts Belgium vs. Canada?

The live broadcast of Belgium vs. Canada will air on BBC.

Where can I stream Belgium vs Canada in the UK?

Live streaming of Belgium vs Canada is available on BBC iPlayer and the BBC Sport website & app.

How can I watch the free live stream of Belgium vs Canada in the United States?

Matchday 1 of Group F features Belgium and Canada competing for the tournament’s first three points. PeacockTV and fuboTV, both of which offer a seven-day free trial, can be viewed in the United States.

FuboTV lets you watch all of the Qatar 2022 FIFA World Cup matches from the United States.

Belgium performed admirably at the last FIFA World Cup, but they lost to eventual champion France in the semis. They will want to do better this time, but they will need to be much better than they have been in recent years. Under head coach John Herdman, Canada has the potential to cause a few surprises, but this looks like a tough matchup for them, and Belgium should have the quality to win.

Despite playing against Denmark and Russia in the group phase of EURO 2020, Belgium only conceded one goal. We don’t see Canada threatening the Belgians on Wednesday because they lack experience competing on the biggest stage.

At 2.37 odds, Belgium should lose to nothing. Given that the Man City star is by far the most in-form member of this Belgian team, we will also back Kevin De Bruyne to score at any time for the Red Devils at the three-and-a-half odds.

Canada are one of five countries that have played in a World Cup but have not scored. If Herdman’s agile front line can take advantage of Belgium’s immobile, advanced center backs, they might be able to end the team’s drought.

However, Canada defeating a nation ranked second in the world would be a complete surprise despite Belgium’s defensive weaknesses.

Belgium is a different breed from their CONCACAF rivals, despite Canada’s impressive qualification. Although John Herdman’s team might have some problems on the break, it’s hard to imagine them winning their first World Cup game in 36 years.

After a few productive months at the club level, De Bruyne is ready to deliver, and the 31-year-old should easily work his magic with his team likely to dominate the midfield.

The final squad may have undergone a few minor adjustments, but the players are all talented and highly skilled.