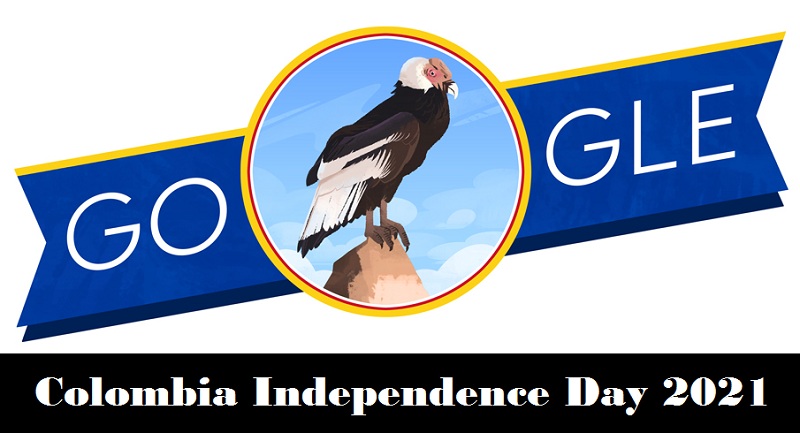 Google Doodle celebrates Colombia Independence Day, a public holiday that recognizes the Colombian Declaration of Independence that eventually prompted the making of the Republic of Gran Colombia, on July 20, 2021.

Colombia Independence Day celebrates the country’s liberation from Spanish rule. On this day in 1810, individuals rampaged to protest. Later on, the Revolution Act was signed, and Colombia acquired temporary independence, which would later become permanent. In 1873, 63 years after the signing of the Revolution Act, the date was formally proclaimed as the anniversary of the announcement of independence.

Colombia was colonized by Spain when its first city, Santa Marta, was established in 1525. In 1549, the Royal Audiencia was made by royal decree. A Royal Audiencia, or high court, was the highest tribunal of the Spanish crown in its territories. At that point, the region was known as New Granada.

The Spanish initially showed up in Colombia in 1499, establishing the first permanent settlement in 1510. Under the reign of King Charles III (reigned 1759-1788), disdain in the colonies was developing as the Spanish insisted that the colonies could just trade with Spain, restricting their development and as the Spanish support for the Americans in the US war of independence expanded taxation. This had prompted small, insufficient rebellions.

Following the Napoleonic Wars and the turmoil in Europe, Criollos (natives born of Spanish descent) who wanted independence held onto their opportunity.

A revolution caused by a flowerpot

On July 20th, 1810, an uprising in Bogota was viewed as the catalyst for independence and it is that uprising that is celebrated by the Declaration of Independence holiday.

In the months paving the way to July 20th, there had been insurgence and revelations of juntas (Military governments) in the region and it was expected that it was inevitable before comparative events occurred in Bogota.

To ensure that the uprising began, the Criollos brought forth a plan. They wanted to make a prominent local businessman, José González Llorente, irate against them, to affect local people. On the morning of July 20th, they visited him to inquire as to whether they could borrow a flowerpot to provide for a fellow Criollo, realizing full well that Llorente would decline.

It’s not exactly clear how he refused, and it is unclear if the flowerpot was broken, and if so, who broke it. Nevertheless, the visit did the trick and proved to be the spark that lighted the riots in Bogota. That evening, individuals’ Junta was formed.

It wasn’t until 1819 when Colombia became a republic and its independence from Spain was officially perceived.

The first Spanish explorers to show up in the region was Alonso de Ojeda in 1499, Rodrigo de Bastidas in 1500, and Christopher Columbus in 1502. Santa Clause Marta, established on July 29, 1525, was the first Spanish settlement in Colombia. It was followed via Cartagena in 1533.

Spanish conquistadors started an expedition to the interior in a search for El Dorado, claiming the regions through which they passed. In 1538, the Spanish named the region the New Kingdom of Granada. It contained modern-day Colombia, Venezuela, and Panama.

In 1808, Spanish kings Charles IV and afterward Ferdinand VII had to surrender by Napoleon Bonaparte, who assigned his brother, Joseph, as King of Spain. Accordingly, the Spanish set up the Supreme Central and Governing Junta of the Kingdom that didn’t perceive Joseph Bonaparte as King of Spain and went about as a crisis government.

Most colonial experts in the Americas swore allegiance to the Junta. Despite their formal declarations of loyalty, numerous Spanish Americans wanted to set up their own juntas and acquire more autonomy. Also, they finally got an opportunity to do this in the midst of the new political emergency that ejected in 1810, following the disintegration of the Supreme Central Junta for the regime. The juntas swore loyalty to King Ferdinand VII however dismissed the viceroyalty.

In Colombia, juntas were set up in Cartagena, Santiago de Cali, Socorro, Pamplona, lastly in Santa Fe de Bogota, the seat of the bishop of the Viceroyalty of New Granada. On July 20, 1810, a group of revolutionaries set up the Junta de Santa Fe. Even though Colombia was set up as a sovereign state just in 1819, it is the foundation of the Junta de Santa Fe that is viewed as the Colombian Declaration of Independence. Its anniversary is celebrated as Colombia Independence Day.

Independence Day is the national holiday of Colombia. It is celebrated with parades, marches, flag hoisting ceremonies, patriotic speeches, sports competitions, outdoor performances, parties, fireworks, and other events and activities held throughout the country.

Independence Day is celebrated with parades and marches all through Colombia. Watching sports and paying attention to traditional folk music are famous activities.

Llorente’s home in Bogota, the scene of the flowerpot incident is currently the ’20 July Museum’ and a well-known place to visit on July 20th.

On July 20, 2021, Google featured Doodle on its homepage for celebrating Colombia Independence Day 2021.

The present Google Doodle honors Colombia’s Independence Day. On this day in 1810, the South American country’s independence movement was started by a rather unassuming culprit: a broken flower vase—and culminated with Colombians marching on the Bogota town square to demand liberty.

From metropolitan focuses in the valleys of Antioquia to the towns held onto along the Amazon River, Colombians meet up today to praise freedom and their cultural heritage. It’s not unexpected to set up the national dish of Bandera paisa, which normally comprises minced meat, white rice, red beans, seared egg, plantains, pork, and avocado and is served in such generous portions it must be brought out on a tray! Different traditions incorporate gathering to play tejo, a game accepted to have begun with central Colombian Indigenous cultures, in which adversaries throw metal disks at hazardous targets.

The present Google Doodle artwork includes the fundamentally endangered Andean Condor, the national animal of Colombia and long-standing cultural symbol in the region dating to around 2500 BCE.