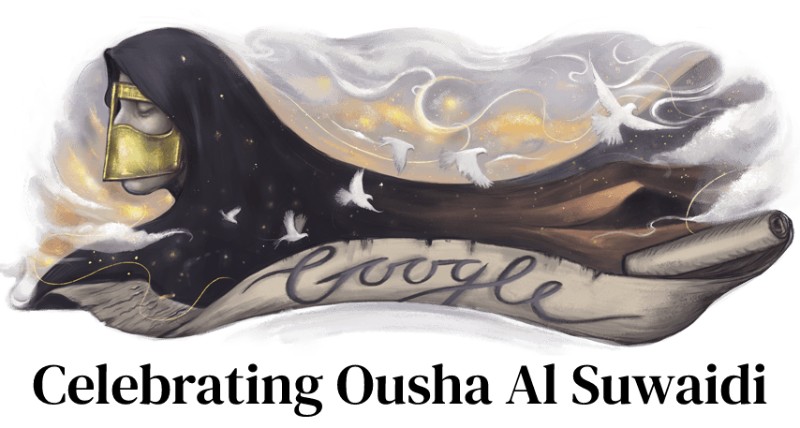 Google Doodle honors Ousha bint Khalifa Al Suwaidi (عوشه بنت خليفة السويدي), also known as Fatat Al-Arab (Girl of the Arabs) and Ousha Al Sha’er (Ousha the Poet), a UAE poet who is regarded as one of the greatest Nabati poets of the 20th century on November 28, 2022.

Ousha Al Suwaidi (Ousha the Poet) was born in Al Ain and raised there before moving to the emirate of Dubai later in life.

She is regarded as one of the best Arabic Nabati poets and a prominent cultural figure. Numerous of her poems have been sung by well-known Emirati and Arab artists.

Her writing has had an impact on the growth of Nabati poetry in the United Arab Emirates, particularly among young female poets.

Sheikh Mohammed bin Rashid Al Maktoum, who was Crown Prince of Dubai at the time, dedicated a poem from his first collection to her in 1989. Instead of giving her the name “Fatat Al Khaleej,” which means “Girl of the Gulf,” he gave her the nickname “Fatat Al Arab.”

Ousha Al Suwaidi (Ousha the Poet) gained national recognition for her powerful poetry recitals when she was 15 years old. The success of Ousha Al Suwaidi in a male-dominated genre paved the way for the next generation of female poets.

She won the Abu Dhabi award, which was presented by Sheikh Mohammed Bin Zayed Al Nahyan, after receiving her award at the 11th Sharjah Festival of Classic Poetry in 2010.

In 2011 an annual award for female Emirati poets was established in her name and a section in her honor was devoted to Dubai’s Women’s Museum.

Dr. Rafia Ghubash, President of the Arabian Gulf University in Bahrain, published a biography of Ousha. In 2009, she received the Abu Dhabi Awards for her service.

Many of her poems, which discuss love, wisdom, patriotism, and nostalgia, were influenced by the Arabian Gulf and desert landscapes. The poems, which were written in Nabati, talk about her own experiences living in the United Arab Emirates as well as the rich culture and history of the country.

On November 28, 2022, Ousha bint Khalifa Al Suwaidi, also known as Ousha Al Suwaidi (Ousha the Poet), will be honored with a Google Doodle.

A prestigious event honored her contributions to the literature on this day in 2011. At this event, poems written in Ousha Al Suwaidi’s honor were recited by several famous scribes.

In Ousha Al Suwaidi’s honor, the poetry community also established an annual award for female Emirati poets. A library at the Emirates International School, and a section of the Women’s Museum in Dubai, were likewise dedicated in her honor.

Ousha Al Suwaidi is remembered for her profound work, which helped set the stage for Arab female poets. Numerous of her poems have been recognized in songs performed by well-known Emirati and Arab singers for the benefit of everyone in the world.

Interesting Facts about Marie Tharp, an American geologist, oceanographic cartographer, and co-publisher of the first world map of the ocean floor