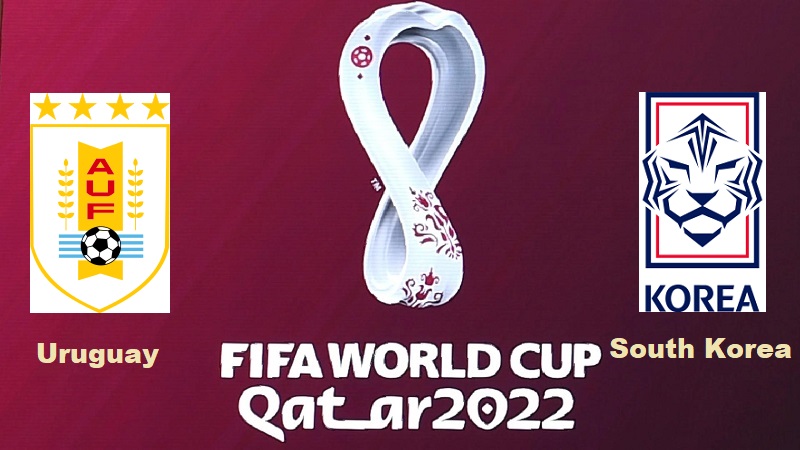 The two teams will know about the assignment that looks for them, with their group, which additionally contains Portugal and Ghana, being ostensibly the hardest of the competition. When Oscar Tabarez, an experienced manager, was replaced by Diego Alonso, a younger manager with less experience, Uruguay took a significant risk.

However, it appears to have paid off, as La Celeste stormed back to finish the season with four straight victories under the 47-year-old’s leadership, finishing third in the CONMEBOL qualification group. Although Diego Alonso has only managed nine matches for the team, it is still unclear whether he will be able to capitalize on the vast pool of Uruguayan talent and live up to his name on the biggest stage. This is his first managerial position with an international team.

With a defensively resolute team that refuses to lose, South Korea is entering their tenth World Cup tournament in a row under Paulo Bento’s leadership. On the negative side, Son’s injury has been a worrying sight for most Korean fans, and it is unknown how the South Korean team might be affected by his absence.

These two nations will also face Portugal and Ghana in a group that looks like it could be competitive. Given the quality of the opponents still to come, they will be determined to avoid losing in this Group H opener.

Despite their outsider status, both teams should be competitive in this group, and a close matchup seems likely here. Uruguay is priced at 50.0 odds and Korea is available at 250.0 odds at the time of writing. Neither team is considered likely to reach the latter stages of this competition.

In the opening match of Group H on Thursday, Uruguay, two-time World Cup champions, takes on 2002 semi-finalists South Korea. Both teams want to get off to the best possible start.

Portugal and Ghana are the other teams in Group H, which is arguably the toughest group in the competition this year.

In 2018, Uruguay reached the quarterfinals, and they will be confident that they can repeat that success this time around because many of their young talents are beginning to mature. For the first time since 2010, South Korea will try to break away from their group.

Since breaking his eye socket at the beginning of the month, the Tottenham forward has not played, but he is going to don the captain’s armband and a face mask to help his country on the biggest stage of all.

South Korea’s World Cup record is poor, as they have lost in the group stage at each of the last two tournaments, despite Son’s stellar performance as the team breezed through qualification.

In South American qualifying, Uruguay finished ahead of Brazil and Argentina as the best team, and head coach Diego Alonso has a talented and experienced team.

The two-time World Cup champions, who reached the quarterfinals in Russia four years ago, enter the tournament in excellent form, having won seven of their last nine matches.

Portugal is one of the favorites in Group H, but Uruguay’s forwards are in better shape than Portugal’s. This gives Uruguay a slight advantage over Portugal.

Although Uruguay is always a favorite for any World Cup, they haven’t won one since the 19th century. The Uruguayans won three of five friendly matches before the 2022 Qatar World Cup, one of which they won against qualified teams from Canada and Mexico.

Uruguay, two-time World Cup champions, are looking to win back their glory days. They haven’t made it past the quarterfinals since 2010 and appear to have a formidable squad that can compete with the best teams in the tournament.

With Luis Suarez, Edinson Cavani, and Darwin Nunez all available for selection, current Uruguay coach Diego Alonso has a wealth of options in the striking department. However, it is likely that Alonso will select Suarez and Nunez as his front two.

Wonderfully, Uruguay completed the South American World Cup Qualification. They moved up into third place in the standings, just behind unstoppable Brazil and Argentina, with four consecutive victories.

Despite playing Chile, Peru, and Paraguay during these four victories, La Celeste have not conceded a single goal.

After putting on a great show in Russia four years ago, the team led by Diego Alonso will undoubtedly have something to say in Qatar.

Before defeating Portugal in the round of 16 tournaments, Uruguay won the group stage with a maximum of nine points. France, the previous champion, were too strong in the quarterfinals.

Even though Luis Suarez and Edinson Cavani are well past their prime, the team, which already has enough quality elsewhere, will benefit greatly from their experience.

Fantastic Federico Valverde and Darwin Nunez, who are both playing significant roles in European champions Real Madrid and Liverpool, will lead Uruguay.

Edinson Cavani and Luis Suarez are still likely to be included, but Diego Alonso can use Liverpool forward Derwin Nunez to try to solve Uruguay’s goal-scoring problems.

Nunez, who has scored just one goal in their last 10 qualifiers, will be expected to replace the two older players mentioned above.

South Korea is the underdog, but they have a strong midfield that they can use to attack and defend, and they will only use two forwards at the World Cup in 2022.

A sign of how strong they are during the local qualifiers is South Korea’s streak of World Cup appearances dating back to 1986. South Korea’s best World Cup performance thus far came in 2002, when they finished fourth.

Despite not qualifying for the knockout round, Korea Republic shocked the footballing world by defeating Germany in the group stage four years ago, eliminating the four-time World Cup champions. This serves as a timely reminder not to underestimate them.

The entire nation was worried about Heung-Min Son’s fitness after he broke his cheekbone while playing for Tottenham Hotspur. However, after having surgery, the 30-year-old has trained with his teammates and should be ready to play for his country from the start of this match, albeit wearing a special mask.

In their last nine World Cup matches, South Korea has only won once. Interestingly, Germany was eliminated from the group stage in Russia four years ago with that one victory.

As they easily finished second in their group in the final round of the Asian World Cup Qualifications, the South Koreans were able to easily secure another appearance on the biggest stage.

Paulo Bento, a manager from Portugal, is in charge of South Korea. The availability of Heung-Min Son, who suffered an unusual eye injury in a recent Europa League match for Tottenham Hotspur, will be crucial to their success in the tournament.

The most recent reports claim that Son, along with Wolves forward Hwang Hee-Chan, may even make it to the first game and lead the Korean line.

Pariahs to qualify, Bento’s side could yet spring a couple of shocks in a possibly close and serious Group H close by Portugal and Ghana.

The matches between Uruguay and South Korea have occurred five times in two competitions, with Uruguay winning four times and South Korea winning one. Seven goals have been scored and three have been conceded by Uruguay.

What time does Uruguay vs Korea Republic match begin?

Uruguay vs South Korea: Times by State in the US.

Where will the match between Korea Republic and Uruguay be held?

Education City Stadium in Al Rayyan, Qatar, will host the match between Uruguay and Korea Republic.

What channel is Uruguay vs South Korea on in the UK?

The match between Uruguay and South Korea will air live on BBC.

Where can I stream Uruguay vs South Korea online in the UK?

You can watch Uruguay vs South Korea live on BBC iPlayer and the BBC Sport website and app.

How can I watch a free live Uruguay vs South Korea match in the United States?

FuboTV (7-day free trial) and Peacock (with a limited-time offer for 0.99/m) will broadcast this Qatar 2022 World Cup Group Stage match in the United States. Other options for watching the game in the United States include UFORIA App, FOX Sports App, Sling, SiriusXM FC, Fox Sports 1, Foxsports.com, Telemundo, and Telemundo Deportes En Vivo. If you want to watch the game on your smartphone, don’t forget to download the app.

If Uruguay is to advance from the group stage, it is critical that they beat a team that has failed to advance from this stage in three of their last four World Cups. In order to unleash Son’s speed on the counterattack, their opponents will likely prioritize defensive stability and make themselves as difficult to break down as possible.

The expectation is, however, that “La Celeste” will overwhelm the backline of Paulo Bento’s team and do enough to earn the three points here when taking into consideration the attacking prowess of this Uruguayan unit and the quality of the forward players they have available to them.

From back to front, Uruguay’s squad is full of talent and tournament experience, and they should beat South Korea, who gave up seven goals in three summer friendlies against South American opponents.

Just before the Premier League went on hiatus, Liverpool striker Nunez appeared to be getting into the groove. He should have a lot of chances to score.

Uruguay are exceptionally out of control and they will enter this competition in the most elevated of spirits in the wake of winning every one of the last four qualifiers in the CONMEBOL zone.

With all due respect to Son, South Korea, and Asian football, Uruguay is our clear favorite in this matchup, and we wouldn’t be surprised if they didn’t win on Thursday.

Just ask Germany, which unexpectedly lost to the Taeguk Warriors in 2018—South Korea are more than capable of defeating even the best teams on their day. However, it’s hard to imagine Bento’s team passing Uruguay this time.

With the old guard of Suarez, Cavani, Godin, and co. supported by a new generation that includes Darwin Nunez and Fede Valverde, Uruguay has a squad that can make it all the way to Qatar.

With both sides having a chance, this could be an exciting battle. At last, however, Uruguay ought to have a lot for their rivals here.